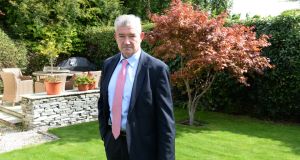 Richie Boucher has joined the board of building materials group CRH as a non-executive director. Photograph: Dara Mac Dónaill

Former Bank of Ireland chief executive Richie Boucher has been appointed to the board of building materials group CRH as a non-executive director.

Mr Boucher (59) took up his position on March 1st. He served as Bank of Ireland chief executive from 2009 until October 2017 having also held a number of key senior management roles within the bank.

A fellow of the Institute of Banking in Ireland, Mr Boucher holds a number of other positions including a non-executive directorship with Greek bank Eurobank Ergasias.

“It’s a very well-run bank,” he told The Irish Times in September. “They’re pursuing all the right strategies and tactics. The thing we can’t influence is the Greek economy. It’ll be a slow, slow recovery process.”

He is also a consultant for Fairfax Financial Group, the Toronto-based investment group headed by Prem Watsa.

Announcing full-year results on Thursday, CRH said it expected to have close to €700 million to spend on further acquisitions to follow its €3 billion purchase of Ash Grove.

Profits at the group rose 15.2 per cent to €2 billion last year.

The group is proposing to pay shareholders a dividend of 68 cent a share, an increase of about 4 per cent.

CRH is Ireland’s biggest company. It makes and sells cement, concrete and a wide range of building materials in the United States, Europe and Asia.

It is one of the biggest players in the US market, where it is a leading supplier of asphalt, which is used to surface roads.