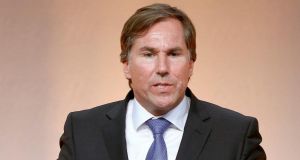 LafargeHolcim’s new chief executive laid out on Friday his plan to revamp the world’s biggest cement group by growing more quickly than the overall market and chopping costs.

The new five-year strategy targets annual sales growth of 3 to 5 per cent, recurring ebitda (earnings before interest, taxes, depreciation and amortisation) growth of at least 5 per cent, improvement in free cash flow to over 40 per cent of ebitda, and boosting the return on invested capital to more than 8 per cent.

The Swiss group took a 3.8 billion Swiss franc (€3.29 billion) impairment charge during its fourth quarter as chief executive Jan Jenisch cleared the decks for his overhaul.

The company’s share price has slumped around 20 per cent since a “merger of equals” between France’s Lafarge and Switzerland’s Holcim in 2015.

The charge pushed LafargeHolcim into a net loss of 3.12 billion Swiss francs. Without the charge, net profit fell 31 per cent to 270 million francs. Analysts polled by Reuters poll had expected net profit of 604 million francs.

It unveiled a programme to cut costs by 400 million francs a year by the first quarter of 2019, including by closing corporate offices in Singapore and Miami. – Reuters

€8m for Dublin city centre site with scope for 124 apartments