Nama got just £340,000 from sale of O’Flynn properties, court hears 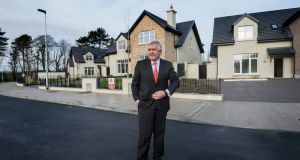 The State’s National Asset Management Agency (Nama) received just £340,000 (€390,760 ) from the O’Flynn group’s sale of two British properties that were later valued at £5.3 million, the Court of Appeal heard.

Companies linked to developer Michael O’Flynn are suing former workers Patrick Cox, Liam Foley, Eoghan Kearney and others, claiming that they earned a €12.5 million profit on a student accommodation project at the property business’s expense.

Mr Cox and the others are challenging the claim on several grounds, including that the companies taking the legal action never employed them.

The defendants’ lawyers told the Court of Appeal on Tuesday that Nama received just £340,000 after Victoria Hall Ltd, part of the O’Flynn group’s UK business, sold sites in Birmingham and Coventry in 2012 to local developer JJ Gallagher for £802,000.

Michael Cush, O'Flynn Group senior counsel, said he didn't accept this characterisation of the evidence. But he said he wouldn't ask the Court of Appeal to engage in disputes about evidence raised in the main trial.

Victoria Hall sold the sites at the behest of Nama, to which the O’Flynn organisation owed €1.8 billion at the time.

He pointed out that the sites were valued at £5.36 million in July 2012 when a partnership of investor Coral Group and another O’Flynn group business, Grey Willow Ltd, bought the sites from JJ Gallagher.

Mr O’Higgins noted that JJ Gallagher only signed a contract to buy the sites in June 2012, shortly before agreeing the sale to the Coral-Grey Willow partnership.

Coral held 90 per cent of the partnership while Grey Willow had 10 per cent. JJ Gallagher sold the properties after Birmingham University agreed to swap a site it owned for the one in the city that the builder had acquired.

Coral and Grey Willow subsequently built student apartments on the land that had belonged to the third-level institution.

The defendants maintain that the O’Flynn organisation kept Nama in the dark about elements of the land deal, a breach of the legislation creating the agency in the first place.

However, Mr O’Flynn dismissed this as “blackmail” at a High Court hearing in January. He stressed that his group had kept the State agency informed at all times.

The defendants are appealing a High Court ruling barring them from getting access to documents relating to the Birmingham and Coventry transactions which they say are central to their defence.

The O’Flynn group is opposing the appeal. Michael Cush, the property and building group’s senior counsel, argued that giving the defendants access to the documents, at a point when the case itself had been running for several weeks, had serious implications for the “finality of litigation and for justice itself”.The Court of Appeal will rule next month.

Mr Justice William Quinn in the High Court adjourned the case itself last month after four weeks of evidence. It is likely to re-start in June.

Observers believe that it will take several weeks more to conclude as the plaintiffs have yet to finish giving evidence and the defence has yet to begin.

8 Dividing up the spoils: The finances of divorce