Dublin docklands scheme to have 32,000sq m of office space and 190 residential units 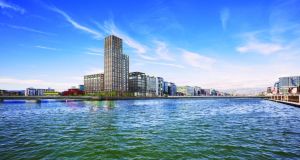 Kennedy Wilson, the development manager of the Capital Dock site, will ultimately own an 85 per cent interest in the site, with Nama owning the balance.

The US investment bank announced on Monday that it is to acquire a 12,000sq m building in a move that will provide it with the capacity to double its Irish work force to 1,000.

Kennedy Wilson confirmed that the bank would become the first major occupier of the Capital Dock development through a forward-funding sale agreement. It is understood JP Morgan will pay about €125 million for the building, about €10,400 per square metre or €961 per square foot.

“We are excited to welcome JP Morgan, through its acquisition of 200 Capital Dock, as the first major office occupier to commit to this best-in-class mixed-use campus development, to grow its existing business and meet its long-term plans in Ireland, ” said William McMorrow, chairman and chief executive of Kennedy Wilson.

The partnership between Kennedy Wilson, which is listed on the New York Stock Exchange, and Nama began as the former sought to get zoning for the Capital Docks site. Part of that site was acquired in mid-2013 when Kennedy Wilson and its equity partner took ownership of a 3.4 acre plot.

Kennedy Wilson is reported to have paid €106 million to secure its interest in the site.

In December 2014, a joint-venture agreement was signed between Kennedy Wilson, its equity partner and Nama. The arrangement entailed Kennedy Wilson and Nama merging their adjacent sites at Sir John Rogerson’s Quay.

Kennedy Wilson, the development manager of the site, would ultimately own an 85 per cent interest in the site with Nama owning the balance.

Planning for the site was awarded in October 2015 and site-enabling works began a month later. The main contract was awarded to Sisk in July 2016 and was one of the biggest commercial development contracts awarded in the Irish market in recent years

Nama originally held an interest of 75 per cent in the 22 hectares of undeveloped land in the docklands strategic development zone. It is estimated that about 370,000sq m (four million square feet) of commercial space and more than 2,000 apartments will ultimately be delivered on the 15 sites originally held by Nama.

Some €250 million is being invested in Capital Dock, which is situated directly opposite the Three Arena in Dublin’s docklands and which will accommodate two large office blocks and a 23-storey residential tower.

In an interview with The Irish Times last year, Kennedy Wilson’s global chairman and chief executive Bill McMorrow said of Capital Dock: “In Los Angeles, that would be a very big development. We’re very proud of that particular project.”

The first of three office buildings is due to be delivered at Capital Dock in late 2017, followed by 190 high-quality residential apartments in mid-2018.

“As a campus location offering over 330,000sq ft of flexible office space in addition to on-site residential, leisure and retail amenities, we expect it will appeal to both Irish and international companies looking for a location in the heart of the capital, and from which to grow their business.”