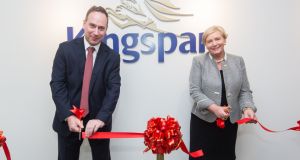 Cavan-based insulation specialist Kingspan has opened an office in Singapore and expects the Asia-Pacific region to be a focus for future growth, with sales on track to double to €20 million this year.

The office was officially launched by Tánaiste Frances Fitzgerald, who is heading up a trade mission of 60 companies to the region. She is accompanied by Enterprise Ireland chief executive Julie Sinnamon and IDA Ireland’s head of growth markets Eileen Sharpe.

“The future growth will come from markets such as Asia, Latin America and maybe Africa at a later stage,” said Manuel Furer, Kingspan’s regional managing director for Australasia and Southeast Asia.

The group last year had around €10 million in sales in Asia -Pacific from the office, a figure it hopes to double this year.

“We’re on track to achieve that and it’s going to be a triple-digit million business hopefully very soon,” Furer said.

Among the products the office will be delivering will be Singapore’s first three-dimensional roof - an eagle-shaped structure on a new bird park, which is part of a safari park in Mandai, said Kingspan’s Southeast Asia general manager Chong Park Cheong.

Kingspan also won a listing with the Singapore authorities for its quad core insulated panel technology.

“This gives us a kickstart in the Singapore market,” Furer explained. “It’s a small office and a small start, but we hope that it will be as successful in Asia as it was in the rest of the world,” said Furer, adding that Kingspan hopes to have an innovation centre in the territory.

During the morning the Tánaiste held talks with Singapore’s deputy prime minister, Tharman Shanmugaratnam, and minister for trade and industry, Lim Hng Kiang.

She then went to an event at the Singapore Institute of Technology attended by allied health students who will visit Ireland as part of an education partnership with Trinity College in Dublin.

Her visit also included a trip to a warehouse kitted out with forklift equipment by the Monaghan manufacturer Combilift, and a meeting with the Dublin-headquartered construction, engineering and project management services group PM Group, which has a number of projects in Asia.

There are 600 Enterprise Ireland clients currently exporting to the region. Last year Irish exports there rose 16 per cent to €1.82 billion.