Homebuilder triples revenue and output on back of strong demand 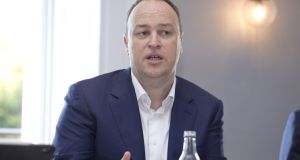 Glenveagh Properties chief executive Stephen Garvey, who is also co-founder of the business.

Homebuilder Glenveagh expects the industry to build up to 23,000 new homes this year, but nothing near the 35,000 level that experts say is needed to meet demand.

Chief executive Stephen Garvey was speaking after Glenveagh reported a big jump in revenue and a move into profit for last year on the back of strong demand for its first-time buyer homes.

However, on the wider supply shortfall, Mr Garvey said: “There is no magic wand to fixing this.” He has previously questioned whether the market had the capacity to build more than 25,000 homes per annum.

Glenveagh’s chief financial officer Michael Rice also noted that Glenveagh and Cairn, the two main publicly listed housebuilders in the Republic, were only likely to add about 300 homes to their build rates this year.

“Where are these thousands and thousands of new homes going to come from?” he said.

Mr Garvey said tweaking the mortgage rules, which limit people to borrowing 3.5 times their income, and a possible extension of the Government’s Help to Buy scheme could help stimulate more supply. In the UK, the limit is typically 4.5 times their income.

Mr Garvey said there was currently a disjuncture between the cost of producing homes and what prospective buyers can afford.

He said housing crisis was better classified as an accommodation crisis, which would require multiple solutions.

Glenveagh moved into profit last year, its second full year of operation, as it more than tripled its revenue and the number of new homes it delivered.

The company said it was “actively constructing” on 17 sites during the year, and that existing open sites are capable of delivering in excess of 4,800 homes. It has plans to deliver an additional 12,000 homes by 2024. It said more than 475 units which are due for delivery in 2020 are now “sold, signed or reserved”, substantially underpinning its delivery target for 2020 of 1,000 units.

Mr Garvey said it was “another strong performance” for the group “both operationally and financially”.

“We continue to exceed our targets, delivering three times the number of unit completions from one year ago,” he said. “The group’s completed investment in attractive residential development land and focus on operational excellence continues to drive reservations, signings and completions.

“As we grow our operations, consistent with our business plan, tripling medium term output to 3,000 units, we continue to drive efficiencies and improve ties with our suppliers to further drive return on capital for the group.

“As our market has evolved since IPO, we also see additional opportunities to capture strong demand from our retail and institutional customers.

“I believe that our core product of starter homes for sale, building quality private rented sector product in sustainable rental locations and placemaking with local authorities through partnership schemes, holds the best potential proposition for the Irish residential market.”

In terms of outlook, the company said “positive momentum” had been maintained during the first two months of this year “where customer demand has been solid”.

“The group has substantially de-risked its 2020 delivery targets with costs largely fixed and strong forward sales in place,” it said.

“The market backdrop remains favourable with significant institutional and private demand for housing.

“The company is well-positioned to deliver a successful outcome for 2020 and the board remains confident that the results will be in line with its expectations.”

North Dublin lands with residential potential on sale for €450,000