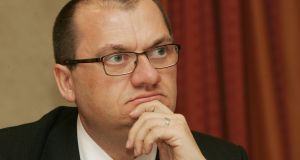 Gavin Slark: He said growth was expected again this year in the company’s Irish merchanting arm, but that it could be lower than previous years. Photograph: Alan Betson

Revenue at Grafton Group rose in 2019, as strong growth in the Irish merchanting business helped offset the shadow cast by Brexit in the UK.

The Irish merchanting business, which includes brands such as Chadwicks, saw an increase of 6.4 per cent in revenue over the year on a constant currency basis, continuing the trend seen over the past five years. However, the growth rate has slowed, Grafton said, with households more cautious of a weaker international outlook.

Grafton chief executive Gavin Slark told The Irish Times that growth was expected again this year in the company’s Irish merchanting arm, but that it could be lower than previous years.

Meanwhile, its retail arm comprised of Woodies DIY achieved a “standout performance”, with revenue up 3.7 per cent. Investment in the branch network across the companies 35 stores helped operating profit rise 18.8 per cent to £19.9 million.

Its online revenue for that arm also grew by a significant 51 per cent, but that was from a very low base.

Elsewhere, Grafton reported solid growth in profitability in its Netherlands business having acquired Polvo in July, increasing its scale in the market.

Mr Slark said the group has been quite open about “finding another geography, very probably in Europe”. The company, he said, was constantly looking at businesses, although he said no discussions were advanced.

The UK was the weak spot for Dublin-headquartered Grafton, with revenue in its merchanting arm down 1.1 per cent to £1.71 billion and its operating profit down 7.1 per cent to £100.9 million.

Mr Slark attributed the poor performance to political and economic uncertainty in the country. He said that in the coming year the reduced uncertainty may lead to some “uplift” in the UK market, although he remained “cautious about the speed of any recovery”.

Grafton said it would increase its total dividend by 6 per cent to 19p per share.