Chief executive was with Dublin-based Crosswood Developments for 11 weeks 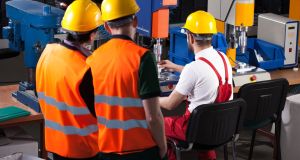 The ruling by the Labour Court upholds an earlier decision by the WRC which the company appealed. Photograph: iStock

The Labour Court has ordered a Dublin-based safety services company to pay a former chief executive €32,300 in unpaid wages.

Declan Ryan started work with Crosswood Developments Ltd on an agreed annual salary of €150,000 on December 11th, 2018. However, 11 weeks later on February 27th, 2019, Mr Ryan was told Crosswood “was terminating the relationship” with him.

Mr Ryan was not paid by the safety service company based at the Red Cow Industrial Estate during the 11 weeks for which he worked for the company.

In his ruling, deputy Labour Court chairman, Tom Geraghty said the company’s claim that Mr Ryan ought to have had no expectation of payment for the period while he was ‘fact-finding’ “amounts to a claim of the provision of voluntary labour, for which claim no substantive evidence was provided”.

Mr Geraghty said that as the company was not a client or customer under a contract for services, Mr Ryan must necessarily have carried out this work in the role of employee, for which he is entitled to be paid.

The ruling by the Labour Court upholds an earlier decision by the Workplace Relations Commission (WRC) which the company appealed.

Mr Ryan did not sign a contract with Crosswood and told the Labour Court that he had made a counterproposal to carry out the functions concerned through a consultancy arrangement.

Mr Ryan said he had a verbal agreement with Brendan Kavanagh, a director of Crosswood Developments, that he would become an employee on a salary of €150,000 per year.

Crosswood claimed that Mr Ryan was not an employee as he refused to conclude a contract of employment.

The company argued that there was no contractual relationship between the parties and, as a result, Mr Ryan had no entitlement to the protections of the Payment of Wages Act.

Mr Kavanagh did not accept that Mr Ryan had carried out the full range of chief executive duties for 11 weeks as a lot of the time was spent fact-finding.