Family of executive chairman spent £33.1m on 10% of company 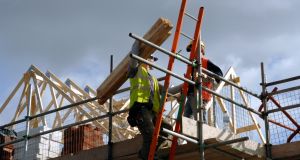 The market value of Abbey stands at €313 million, more than double that of Gallagher Holdings’ €145 million takeover bid in 2012. Photograph: iStock

Housebuilder Abbey’s executive chairman, Charles Gallagher and his family have increased their stake in the company to 94.5 per cent.

The family’s Gallagher Holdings investment vehicle, which made a mandatory takeover bid for the entire group in 2012 after breaching the 50 per cent mark, spent £33.1 million (€38.6 million) buying an additional 10 per cent stake in Abbey on Wednesday, it said in a stock exchange statement.

It is believed that the seller was US investment management group Fidelity Investments , Abbey’s second-largest shareholder. A spokeswoman for Abbey declined to comment while a spokesman for Fidelity wasn’t immediately available for comment.

The market value of Abbey stands at €313 million, more than double that of Gallagher Holdings’ €145 million takeover bid in 2012. The offer period ended in September that year, with the family owning almost 73 per cent of the company.

The Gallaghers have since bought further shares on occasion. The company’s pretax profit dropped almost 10 per cent to €21.6 million for the six months ending in October from the year-earlier period, it said on December 6th.

Abbey’s housebuilding division completed 293 sales in the period, 233 of which were in the UK with the remainder spread across Ireland and the Czech Republic, with a turnover of €92.54 million.

Mr Gallagher said at the time that the group’s margins had held up well, “reflecting a higher proportion of affordable homes” in its sales mix. He added, however, that market conditions in its main market, the UK, were “patchy”.