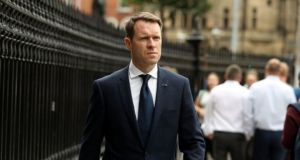 Pat Crean, CEO of Marlet Property Group. He sought to build a development of 14 mostly four-bedroom houses on the site of the former Highfield nursery in Rathgar. Photograph: Jason Clarke

Leading property developer Pat Crean has been refused planning permission for a small development of luxury homes in an upmarket Dublin suburb on a number of grounds including its low housing density.

A residents’ association and property management company were among a number of objectors who successfully appealed the decision of Dublin City Council to approve the development of 14 mostly four-bedroom houses on the site of the former Highfield nursery in Rathgar.

An Bord Pleanála overturned the council’s decision to grant planning permission for the application by Crekav Trading GP, a subsidiary of Mr Crean’s Marlet group, for the development of what the company described as “generously-sized family homes”.

The area, which is located off Highfield Road and close to St Luke’s Hospital, has some of the most expensive properties in Dublin.

An Bord Pleanála said the proposed density of 22 housing units per hectare and the preponderance of four-bedroom houses would not provide an acceptable efficient use of serviceable land.

The board said the density was contrary to ministerial guidelines which generally recommend permission should only be granted for projects in excess of 30 units per hectare in urban areas.

It also refused permission because access to the site was through lands not under the control of Crekav. An Bord Pleanála stated this factor meant the proposed development would pose a danger to the safety of the public as it had not demonstrated that safe access could be provided.

The board rejected the recommendation of its own inspector to grant planning permission for the project.

“The proposed low density and lack of housing mix would be unacceptable in terms of efficient land use on a serviced site near high-quality public transport,” the board concluded.

The site is close to the Luas stops at Cowper and Beechwood.

The ruling will allow 64 additional bedrooms at the new hotel, bringing the overall accommodation to 303 guest rooms.

The board ignored the recommendation of its own inspector as well as objections from An Taisce in sanctioning the increased height for the development. Balark received support for the increased building height from Fáilte Ireland and Abbey Cottages, a company that is also appealing a decision of Dublin City Council to allow it to add two floors to its planned hostel on an adjoining site.