Project will consist of 248 houses, 36 duplexes and 36 apartments on the main site 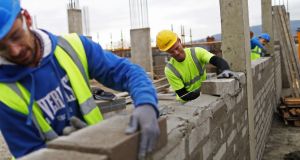 Cairn Homes, one of the country’s largest housebuilders, has secured planning permission for a major new development that will provide almost 400 new homes in south Co Dublin.

An Bord Pleanála has approved the plans by Cairn for the strategic housing development on more than 16 hectares in Newcastle under the fast-track planning system.

The board rejected the recommendation of its own inspector that the plans for the 380 homes, together with a creche, commercial unit and a public park should be refused.

The project will consist of 248 houses, 36 duplexes and 36 apartments on the main site with 50 other units on three smaller sites at the corner of Burgage Street and Newcastle Boulevard.

The board ruled that an additional 26 houses originally proposed by Cairn should be omitted from the scheme, with that site instead developed as public open space.

The development will also reserve a site for a new school to serve the area.

The inspector had recommended that planning permission for the development should be refused on the ground of its adverse impact on biodiversity due to the removal of two large sections of 700-year old hedgerows as well as its negative impact on landscape and views.

She questioned why, if the hedgerows, otherwise known as burgages, were of such national importance they were on land zoned for residential development.

The inspector claimed the loss of important medieval landscape features could have been avoided with “a more creative design”.

However, An Bord Pleanála said that, subject to a number of planning conditions, the development was acceptable in terms of design, form and layout.

The board said the retention of other sections of historic hedgerows and the reinstatement of other hedgerows would result in an overall increase in new landscaping and tree planting.

It claimed the hedgerows earmarked for removal had “minimal arboricultural value” and that the development adequately integrated historic hedgerows into the layout of the scheme.

“It provides high-quality usable open spaces, established a sense of place with variety and distinctiveness, reflective of the village of Newcastle, and provides an appropriate level of residential amenity for future occupants,” it added.

The board said the mix of housing units of varying sizes catered for an appropriate range of different housing needs.

It said it differed with the view of its own inspector about the impact of the development on biodiversity and landscape.

A large number of submissions were received from existing residents in Newcastle, as well as local politicians. Many stated they had no objection to the development in principle but had concerns about details of the housing scheme.

South Dublin County Council had also recommended that planning approval should be given for the project.