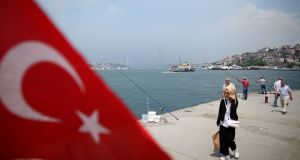 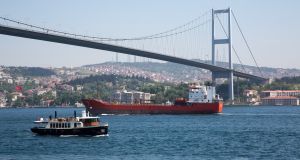 Freight ship and pleasure boat passing under the Bosphorus Bridge in Istanbul. 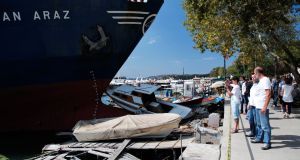 Cargo ship that crashed into the Beykoz pier while crossing the Bosphorus in Istanbul on September 6th, 2013. Photograph: Gurcan Ozturk/AFP/Getty

A controversial and long-expected project – of a scale Turkish president Recep Tayyip Erdogan admitted is “crazy” and would constitute a “dream” – is to get off the ground this year.

Kanal Istanbul, a 45km channel linking the Black and Marmara seas west of Istanbul, is expected to cost around €12 billion and would be the biggest project ever attempted in Turkey.

In January, Turkey’s transport minister announced foundation work would begin this year while, in May, Erdogan said construction of the canal would be a main priority following next week’s parliamentary and presidential elections.

The canal is a huge undertaking. Around 1.5 billion cubic metres of soil will be excavated and used to build artificial islands. Six thousand workers will be employed in the construction phase, according to local media.

It would see the western half of Istanbul, home to some eight million people, become an island. Several shoreside villages will be built, with sales of the new properties expected to partly offset the huge cost of construction.

At up to a kilometre wide in places, Kanal Istanbul would accommodate 160 vessel crossings a day, as well as submarines.

An official starting date has yet to be announced, but at a press conference in January, Ahmet Arslan, Turkey’s minister for transport, maritime affairs and communications, said a route has been finalised.

An official at the ministry for transport said no comment or further details of the project would be forthcoming until after elections on June 24th.

Part of the route would see the canal run through and contaminate a freshwater reservoir that supplies the European districts of Istanbul. The minister for transport, however, says that freshwater will instead be piped under the canal to avoid any threat to what is a critical water source for city residents.

While opposition from environmentalists and locals is expected to ramp up as the construction phase nears, few can deny the need for an alternative to the Bosphorus Strait, the only shipping route currently available.

On a recent warm morning in May, the 198-metre long Nele Maersk container ship entered the Bosphorus from the Marmara Sea from where it had to negotiate a path past three small fishing boats, five ferries, a pleasure craft and the infamous Bosphorus currents that run in opposing directions at different depths. Behind the Maersk vessel, lined out across the sea, were four other large ships waiting to pick a path northward through the Bosphorus to the Black Sea and on to Romania, Russia or Ukraine. It’s a scene of organised chaos.

As the only maritime link between the six countries bordering the Black Sea and Mediterranean shipping routes to the south, more than 43,000 vessels traversed the Bosphorus Strait last year, making it one of the busiest waterways in the world. Increasing levels of ship traffic in recent decades have seen it become difficult to navigate.

Last month, an accident that saw a 225-metre bulk carrier crash into a waterfront villa underlined the dangers of traversing the heart of Istanbul, while inadvertently adding credence to Erdogan’s canal ambitions.

“We think that this project does not have scientific quality, and would result in geographical, ecological, economic, urban and cultural destruction, and it should be stopped,” says Emin Koramaz, chairman of the board of Union of Chambers of Turkish Engineers and Architects. Once the Black and Marmara seas are joined, serious marine ecological damage would follow, he says.

Voice their opinions In May, Reuters reported that workers from a nearby megaproject, the under-construction Istanbul New Airport, were bussed to a public meeting ostensibly held to allow local residents voice their opinions on the canal project. However, the large number of workers filled the meeting hall, leaving environmentalists and local residents stuck outside.

“The owners of these lands need to be inside,” Oktay Teke, a local administrator, told a Reuters correspondent at the scene. “If land is going to be expropriated, it will be our land. We will lose our homes.”

Thousands of residents of Sahintepe, a district north of an existing lake to be used as part of the canal, may have to be rehoused. And with the canal planned to open just five years from now – marking the 100th anniversary of the founding of the Turkish republic in 2023 – analysts are sceptical that a project of such a scale can be completed in time.

On top of all these challenges, with inflation persisting in double figures and a budget deficit of around €10 billion, questions surround whether Turkey can afford to go through with yet another hugely expensive project.

Regardless, the new canal is set play a key geostrategic role. Millions of tonnes of Ukrainian and Russian grain that countries in Africa, Asia and the Middle East depend on pass through the Bosphorus Strait every year, and Russian warships regularly use it en route to supporting Moscow’s war effort in Syria.

International vessels can pass through the Bosphorus without being subject to tariffs due to an 82-year-old treaty called the Montreux Convention.

The Turkish government says the new canal would remove freight traffic from the Bosphorus, leaving it free for use by commuter vessels and tour and pleasure crafts. But unlike the Bosphorus route, merchant ships entering and exiting the Black Sea via Kanal Istanbul would pay the Turkish authorities for this service, resulting in a new, long-term income source for Ankara (Last year, Egypt made €4.8 billion from tariffs on 17,000 Suez Canal crossings).

“When we look at the route of Kanal Istanbul, planned units and facilities will be placed on areas suitable for agriculture and stock-raising,” says Emin Koramaz of the Union of Chambers of Turkish Engineers and Architects, which has dozens of legal complaints pending against the government. “In other words, the project will destroy the most productive agricultural areas in the region.”

The Turkish president rarely lets criticism or legal impediments get in his way. He has made the rolling out of landmark projects – multibillion euro bridges, airports and hydroelectric dams – a trademark of his 15 years in power.

Kanal Istanbul is bigger than anything attempted before in Turkey, but few would bet against Erdogan pulling it off.