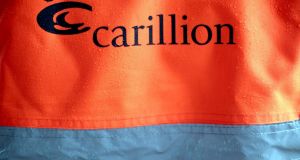 The €100 million State school-building programme was stalled by the collapse of UK giant Carillion. Fears are growing that the schools will not be ready on time for their scheduled September opening. Photograph: Yui Mok/PA Wire

One of the banks funding a €100 million State school-building programme, stalled by the collapse of UK giant Carillion, confirmed that it is working with authorities to restart construction.

Sources have claimed that German lender Helaba and MUFG (formerly Tokyo Mitsubishi Bank), which lent money to the project, were behind delays in restarting work on the six schools in the southeast. Fears are growing that they will not be ready on time for their scheduled September opening.

Helaba confirmed that it is continuing to explore options alongside MUFG to get the schools completed, and has met representatives of the State’s National Development Finance Agency (NDFA) and other parties. MUFG made a similar statement last week.

The NDFA – which contracted for the work on the Department of Education’s behalf – has stressed to both banks the importance of getting construction finished on time.

BAM, Sisk and JJ Rhatigan are all said to be in the running for the contract to finish building the schools. Work on the projects halted in January. The original builder, Sammon Construction Ireland, went into liquidation this month.

Inspired Spaces, a joint venture between Carillion and Dutch Infrastructure Fund, won the contract to build and manage the schools. It engaged a Carillion subsidiary to build them and that company sub-contracted this work to Sammon.