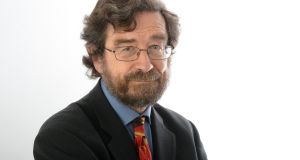 Economist John FitzGerald has said a ‘profound pessimism’ nationally meant Ireland missed an opportunity to deal with the housing crisis at a much earlier date. Photograph: Dara Mac Dónaill

Dublin local authorities are holding back the development of housing through their failure to deal with regulatory constraints and restrictions on height, economist and Irish Times columnist John FitzGerald has said.

A “profound pessimism” nationally meant Ireland missed the opportunity to deal with the housing crisis at a much earlier date, he said.

“It was clear from 2012, when the recovery turned the corner, we were going to need 25,000 dwellings a year over the following 20 years, but people didn’t believe Ireland had a future and nothing was done. We missed the opportunity of taking action three years earlier, which might have put us in a better position today.”

However, he said, Dublin City Council and Dún Laoghaire-Rathdown County Council were still not addressing the problems holding back housing supply.

“The major problem at the moment is the supply constraint in delivering housing and this body, Dublin City Council, is one of the problems,” he said.

“The fact is that you [Dublin City Council] have failed and Dún Laoghaire has failed to deal with some the regulatory problems, that it is in your hands to deal with.

He added that the councils had reduced the Local Property Tax instead of using the money to fund more infrastructure.

Green Party councillor and lecturer in urban planning Ciarán Cuffe said there was a danger in focusing too much on height. “The issue is one of density,” he said.

There was, however, too much bureaucracy in the delivery of housing, with particular delays in the Department of Housing, in terms of sanctioning local authorities to build, he added.

“It takes a minimum four years into build social housing in the middle of a housing crisis.”

Labour councillor Dermot Lacey said if the council raised property tax the Department of the Environment [now housing] would take it away from Dublin.

“It is the most destructive and dysfunctional department, marked by bureaucratic inertia and the desire to hold on to power

City architect Ali Grehan said the public-procurement process stymied the council in choosing the best people for the job.

“Public procurement means we cannot build relationships with good people. A private operator doesn’t have to throw out an opportunity to everyone in the market and accept the lowest price, but that is what the public sector has to do.”

1 Parts of Brown Thomas and Arnotts to reopen next week
2 Should my mam wait for house prices to drop before buying?
3 Hangover for the drinks sector as pint sales go flat
4 Brother is dragging his heels as executor of uncle’s will - is there anything I can do?
5 Covid-19 mortgage breaks: What’s the catch?
6 Revenue faces US drug company Perrigo over disputed €1.64bn tax bill
7 Supermarkets see fastest pace of sales growth in 15 years
8 Irish whiskey sales near milestone of 12m cases a year
9 Almost 70% of home buyers to purchase within next year
10 Finance chief who guided Tesco out of scandal to retire
Real news has value SUBSCRIBE