May 16th, 2017: An Taisce is seeking urgent action from Dublin City Council to halt the dereliction of the historic Iveagh Markets. 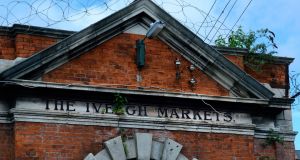 The building was split into two markets, a “dry” clothes market fronting on to Francis Street and a “wet market” to the rear. Photograph: Cyril Byrne

Heritage body An Taisce is seeking urgent action from Dublin City Council to halt the dereliction of the historic Iveagh Markets, which were to have restored as part of a €100 million redevelopment scheme.

Temple Bar hotelier and publican Martin Keane had been due to start work two years ago on an ambitious project to redevelop the late Victorian market on Francis Street in the Liberties, along with the former music venue Mother Redcaps, as a hotel, restaurant and food market complex.

However, the project, which has due to have been completed this year, has not progressed and An Taisce said the market building, a protected structure, is at serious structural risk.

The Iveagh Markets were built in the early years of the last century by the Guinness family to house street traders who had been displaced by the construction of the nearby Iveagh Trust housing development on Patrick Street, and handed over in trust to Dublin Corporation.

The building was split into two markets, a “dry” clothes market fronting on to Francis Street and a “wet market” to the rear, selling fish, fruit and vegetables, accessed from the entrance on John Dillon Street. There was also a laundry and delousing house in an adjoining building.

The corporation, now the city council, continued to operate the market throughout the 20th century, but by the 1980s it had become very rundown and it eventually closed in the 1990s.

In 1996, the council announced it was seeking a private developer to regenerate the market. The following year Mr Keane secured the tender with a 500-year lease on the building.

However, the development became mired in an ownership row between the corporation and the Guinness family-controlled Iveagh Trust. The dispute was not resolved until 2004. Mr Keane applied for planning permission, which was granted by An Bord Pleanála in 2007.

In 2012, he secured a five-year extension of planning permission, but this will expire in August.

An Taisce’s heritage officer Ian Lumley said he accepted the development was “one of the casualties of the financial crash” but he said it could not be left in its current condition.

“There is water damage running through the building, with the result that the iron frame and roof trusses are suffering expansion and corrosion and the masonry is deteriorating; there is spalling of the surface of the brickwork, which indicates that water is percolating through internally,” he said.

“The gutters and downpipes are blocked with buddleia [a weed], and the level of graffiti, which has a blighting affect on the whole area, is out of control.”

The council had two options Mr Lumley said; either it used its enforcement powers to insist Mr Keane restore the market, or repossess the building.

The council said it was seeking legal advice on how to proceed.

Mr Keane, who is behind Blooms Hotel and the Oliver St John Gogarty pub in Temple Bar, did not respond to queries yesterday.

1 Thirteen further deaths and 1,269 new cases of Covid-19 recorded in the Republic
2 Government planned to extend sweeping pandemic powers with 45-minute debate
3 Life under Level 5: What will the next six weeks look like for the State?
4 Level 5 enforcement: Fines for house parties and breaching 5km rule
5 Covid-19: State moves to Level 5 for six weeks with hopes of ‘meaningful’ Christmas celebrations
Real news has value SUBSCRIBE