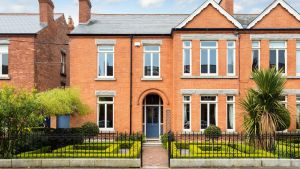 One of the attractions of houses on Healthfield Road in Terenure, besides its quiet setting in a cul-de-sac compared to the otherwise busy roads in the area, is the size of the rear gardens. These properties rarely come to market and tend to be homes for life, where owners are inclined to sell on only when they need to downsize from an empty nest.

One such is number 15, a fine Edwardian semi-detached property dating from 1907. The Stringer built house was purchased by current owner Deirdre McHugh in 1996, who at that time renovated the entire property.

Then in 2009 an extension designed by architect Brendan O’Connor of Adobe Design was added to the rear of the house, which now has a spacious 258sq m (2,777sq ft) of charming accommodation. In addition the attic was converted, giving a further 38sq m (409sq ft) of space.

The property has three reception rooms in the old part of the house; interconnecting drawing and dining room on one side of the hallway and a smaller cosy living room on the other. Worth a mention is the remarkable herringbone oak parquet which was hidden under the carpets when the house was bought in 1996. This has now been restored and polished and gives a lovely warmth to the rooms.

Interiors were given an overhaul by designer Cassandra Sheridan while the gardens were tackled by Iain and Frances MacDonald, the well-known horticultural husband and wife team who first met while working at the Royal Botanic Gardens at Kew, and whose two-acre gardens at The Bay in Camolin Co Wexford are open to the public.

Heavily stocked herbaceous borders frame a neatly trimmed lawn in the rear garden, while the more formal front garden is low maintenance, just requiring a trim every now and then to the lollipop bay trees set within box hedging.

The property has five bedrooms, one of which is used as an office. The attic room, which was converted in 2009, is now used as a further guest room. There is also an additional bathroom at this level.

A further attraction of the property is the new BER rating of C3 – the entire house has been dry lined, with extra insulation in the attic and new double glazed timber framed windows which were installed three years ago.

Only three houses appear on the property price register as having sold on the road since records began in 2010. Most recent is number 19, a detached house, almost the same size but with a much larger garden on 0.43 of an acre. It sold in 2017 for €1.985 million – its asking price was €1.75 million, and number 4 appears to have sold quietly for €1.25 million in 2017. Number 15 is in turnkey condition and is on the market through Sherry FitzGerald seeking €1.695 million.