An original Dublin Georgian in the city centre

Terraced two-bay, four-storey is set over a raised basement and dates from the 1820s 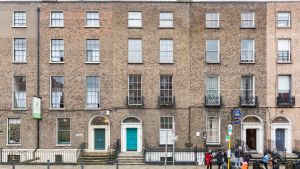 The townhouses of Lower Gardiner Street form part of the Dublin’s Georgian heritage, tracking the history of this part of the city, from its days as city pads for the gentry to up to a 10-to-a-room tenements.

Number 81, a protected structure, is sandwiched between two hostels and offers a buyer with deep pockets the chance to own a fine example of historic Georgian Dublin.

The terraced two-bay, four-storey house is set over a raised basement and dates from the 1820s. It has a three-storey return, a sizeable east-facing courtyard and its original stone mews structure, giving the property vehicular access from Mabbot Lane that, subject to planning, could be turned into a boutique apartment block. There are four-storey apartment complexes to either side.

The house has been in the same family since the 1959 when Peter O’Brien bought it for £300, according to his granddaughter, who owns the building with her sister. Peter was one of 12 children of William O’Brien, who was Dublin’s fire chief in the 1930s and started his working life as a shop assistant in Baxendale’s in Capel Street. He bought his first hardware business on Talbot Street. And although no longer in the family, that shop –  originally at number 60 and now at number 65 to 67 – still carries his name over the door.

O’Brien already owned the adjoining property, number 82 and the property next door, number 83. And you can still see the frame of a set of gates connecting the rear of 81 to 82 in the former’s back yard.

Currently laid out in flats its bull-nose granite steps lead up to a Doric door case with an 11-panel door in the Georgian style that opens into a fine hall where ceiling heights are more than 3.3m (almost 11ft). The floor has been covered in a checkerboard black and white vinyl and the walls are rag-rolled in a turquoise blue, fashionable in the early 1990s.

The current owners live in the apartment on the first floor also using the hall level rooms where original broad timber boards are in situ. The room to the front is used as storage but in the room to the rear, there is a fine, almost floor to ceiling window overlooking the east-facing, paved garden and an inset wood-burning stove to warm it.

On the first floor, where the windows are six panes over six, as they are on the second floor, the original interconnecting rooms were turned into a one-bedroom flat in the 1990s. The ceiling heights of 3.8m accommodate two mezzanine beds in the room to the rear.

There are two more apartments, each two-bedroom, one on the second and another on the third floor. Each has an open-plan kitchen, living to the rear.  The second floor was refurbished by Pac Studio in 2012, led out by conservation architect Merlo Kelly. There is also a basement with separate front access.

The house is in need of modernisation. For example, it has electric storage heating in most but not all of its rooms and while Lambstongue has replaced the windows at hall level the rest will need upgrading.

The property falls within the Living City Initiative area, available to view on Dublin City council’s website, which allows owner occupiers or investors within certain areas of the city to claim tax relief for money spent on refurbishment and/or conversion of residential property, either as income tax relief for owner occupied residential or capital allowance for rented residential. Under the current scheme, any works carried out will need to be completed by May 2020 to qualify.

How will the Covid-19 era affect our youngest citizens?
4

School closure might be a dream for some children, but it is a nightmare for others
Real news has value SUBSCRIBE