Investors spent €8.6bn on offices in Ireland since 2013 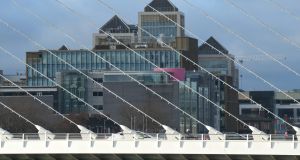 Investors have spent almost €8.6 billion on offices in the Republic since 2013, a report published today shows.

Estate agent Savills Investment Report 2019 states that investors pumped €1.48 billion into Irish offices last year. According to the report, investors have splashed out almost €8.6 billion buying offices in the Republic since 2013, the year economic recovery began.

Last year’s figure was 73 per cent ahead of 2017and included several “portfolio” sales, that is a number of buildings sold in a single deal.

Savills notes a sharp increase in sales outside Dublin in 2018, with 24 buildings changing hands. The biggest transaction outside the capital was the sale of three buildings together, dubbed the Plassey Portfolio, for €25 million.

Last year alone, businesses agreed to rent 345,783sq m of office space in Dublin, a record for the capital.

The report also notes that even excluding one of the biggest such deals, the pre-letting of 80,826sq m to social media company Facebook, 2018 would still have been the city’s fourth best year for office lets.

More than half the jobs created in the Republic last year were in Dublin and 15,000 of those, 58 per cent, were office-bound.

“By any international comparison Ireland’s rate of job creation has been exceptional in recent years. And 30 per cent of all the jobs created last year were Dublin office-based positions,” he said.

“Net yields – which measure a property’s ability to generate rental income relative to the price that has to be paid to buy the property – remain higher in Dublin than in many other European capitals. And this is also attracting capital,” he said.

Even against a turbulent global background dominated by Brexit and US-China trade tensions, Savills expects demand for offices in the Republic to remain strong this year.