Property tax: What does it mean for you?

Q&A: What are the likely future options and who is exempt? 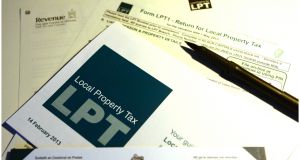 What are the scenarios for the LPT in the future?

The Government has decided – yet again – to postpone its decision on just what it’s going to do with the Local Property Tax (LPT). The tax, which was first introduced back in 2013, hasn’t changed since, which means that we’re paying tax today on an asset that was valued some six years ago.

But homeowners are unlikely to bemoan this idiosyncrasy; after all, the delay means that no-one will see an increase in their local property tax bill over the coming year, while first time buyers will remain exempt from the tax, as will purchasers of new homes.

For homeowners right across the country, it’s undoubtedly good news; if the Government had opted to re-value homes, then those living in urban areas, particularly Dublin, would have faced substantial increases in their annual bill. Indeed the Government’s yield from the tax would have soared from about €482 million to €729 million.

Given that these valuations were based on 2013 values – and as the price register was only new, and sales were at particularly low levels, many homeowners would have estimated to the downside - it means that to suddenly switch to 2019 values would see most homeowners bill surge forwards.

Consider someone living in Dún Laoghaire in a house now worth €850,000; they’re only paying tax of €650 a year (including the local 15 per cent reduction). But if the tax was to be based on current values, they’d see their burden rocket to €1,338.

Now however, the Government has given everyone a year of reprieve, which means that they’ll continue to pay the tax at the current rate for 2020.

Well, who knows? After all it’s not the first time that the tax has been postponed. The new valuation date is now November 1st 2020, which means that the Government has earned itself another year to make the tricky decision of just how it’s going to increase the tax burden.

And just what it will decide to do remains unclear. However, it’s unlikely that any increases will be muted, as the review group charged with assessing the future of the tax repeatedly cites a target yield of €500 million for the tax – and it came to €482 million last year.

So what are the options?

As mentioned above, revaluing properties at current prices will lead to substantial hikes so is unlikely to happen.

The first option then is to collect enough to bring in €500 million a year; this would see properties valued at current rates but the rate charged fall to 0.114 per cent, resulting in a small uptick for homeowners. However the increases will differ substantially – €170 for someone in Dublin city but just €2 in Meath.

The second option is to fix the tax based on funding requirements for local authorities. But again this approach has significant anomalies - a homeowner in Co. Monaghan will face the biggest increase, of €157, while our Dublin city dweller gets an increase of just €46.

A third scenario would see a different rate applied in each valuation band, again with the goal of raising €500 million – this time our Dublin city homeowner would pay the largest increase, of €174, while our Meath dweller pays just €7 more.

A fourth option is the same as the third, but to impose a minimum first valuation band at a liability of €90; while a fifth is to increase all of the valuation band thresholds by 80 per cent.

Whatever it decides, the Government will be mindful however of doing nothing – yet again. The last time we had a property tax, back in 1982, it ended up raising very little revenue and was abolished in 1997.

What about people exempt from the tax?

These included first-time buyers; buyers of homes in ghost estates; buyers of new homes; homes with pyrite damage and those who built their own home.

However, the Minister has indicated that he wants these exemptions now “kept to a minimum” so there is likely to be some bad news on the horizon for those who have enjoyed paying no tax since 2013.

Given that about 60 per cent of exempted properties are accounted for by trading stock, ghost estates and first time buyers, these look likely to be targeted first.

These three cohorts were identified in the Review Group’s report as being ripe for a cull. If the Government goes ahead with this recommendation, then it means that people who bought a home known as “trading stock”, which had previously been unused, from a builder or developer between January 1st 2013 and October 31st 2019 will have to start paying property tax for the first time in 2020, as will first-time buyers, and purchasers of new homes.

However, a number of exemptions have been recommended to continue. These include properties affected by pyrite - provided that they have a damage rating of ‘2’ or ‘1 with progression’.

Not everyone who was required to pay the tax had to; some homeowners were entitled to defer their property tax

And most of these will continue.

According to Mr Donohoe, “deferrals, such as the deferral option for those taxpayers with lower incomes, should be maintained and some thresholds should be increased”.

Isn’t the tax getting a bit unfair?

Perhaps. On the one hand, everyone is still paying the tax based on 2013 market values. Yes, if you bought a new home you can reasonably ask how could you value this as if it was six years old, but you don’t have to, because new homes are still exempt.

And, while there have been over 13,280 corrections since 2013, whereby the valuations on homes have been increased – some 786 of these were last year – these corrections were not to bring values into line with current market value. Rather, they were to correct 2013 valuations.

But then, on the other hand, the number of those who don’t have to pay the tax continues to rise each year.

Last year, figures show that some 50,000 homeowners were exempt from the tax, while there were also some 58,000 claims for deferral.

So, while tax on some 1.9 million properties was paid, a further 108,000 – or 5 per cent – did not. And that figure is actually likely to be considerably higher.

According to Revenue, the aforementioned 50,000 only refers to people who filed a return claiming the exemption.

But if you bought a new or previously unused property, then you didn’t have to file an LPT return - so the figure is likely to be considerably higher. Figures published in the Daily Mail suggest another 60,000 homes are exempt, as they were built over the last six years. So the exempt figure is actually closer to 9 per cent.

But with the recommendation to include new homes in the property tax going forward, the issue of valuation will arise again. If, for example, you purchase a home in 2023, but the valuation date was 2020, should the property be included in the tax and how can it be valued?

Well the Review Group recommends that properties be valued retrospectively, “as if they had existed on the preceding valuation date.”

One of the recommendations is that the bands should be broadened; if this was to happen, then the 0.25 per cent rate would apply to properties above the €1.8 million valuation – up significantly from 1 million at present. This means that the tax owed could actually fall, as an owner of a property worth 1.1 million would then pay tax at a lower rate – ie 0. 18 per cent.

Any good news for landlords?

Since its introduction back in 2013, it’s been a constant issue for landlords; can they deduct their property tax bill from their tax liabilities? However, while such a move, which has an estimated annual cost of about 19 million a year was recommended in the inter-departmental group report on LPT back in 2012, it was never allowed.

And now the Minister has said that the Review Group “does not support deductibility of LPT for landlords”, so at this stage, it now looks unlikely that this will change.

Another submission argued that LPT should also be deductible against management fees, such as those that arise in an apartment building. However, again the review group said that there was no case for deductibility of such management fees.

A small number of submissions to the review group called for exemptions for owners who were aged over 66. However, the Review Group noted that the tax expenditure to exempt this group would cost around €75 million a year based on 2018 figures.

1 Opioid executive admits to ‘no morals’ ahead of prison term
2 Are there annual limits on inheritances or gifts to a child?
3 Who are Ireland’s 17 billionaires?
4 American YouTubers embrace the crisp sandwich
5 South Dublin Credit Union members urged to borrow more to ensure survival
6 ‘If you don’t like challenges, you should not be in the airline business’
7 Fallon & Byrne founders McHugh and Byrne exit group
8 Ryanair wants Irish courts to block Skyscanner from selling its flights
9 Paschal Donohoe's biggest regret: 'Not managing the National Children’s Hospital better'
10 My father in a nursing home wants to gift me his house
Real news has value SUBSCRIBE