Cost of building homes can be ‘much cheaper’ 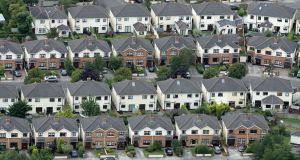 Local authorities can build homes for considerably less than they are paying private developers for social housing, figures published by the Department of Housing show.

When procured directly by local councils, the “all in”cost for a typical three-bedroom house was on average less than €300,000 and in some areas less than €250,000.

That is well below the figure published by the Society of Chartered Surveyors in Ireland last July. It found that the cost of building a three-bedroom semi-detached house in the Greater Dublin Area was €371,000.

However, the SCSI notes that its figures are purely for the Greater Dublin area – the most expensive place in the State for construction.

It also notes that local authorities do not have to bear the same risk premium in securing construction finance and also that, in some cases, they will be building on land that they have bought some years ago at prices prevailing at that time.

The Department of Housing figures, based on competitively tendered local authority housing projects in 2019, show the cost per unit in Dún Laoghaire-Rathdown and in south Dublin was €277,500, while in Waterford city it was €243,100.

In the most expensive location, Dublin city, the cost was €348,900, but this was considered elevated on account of atypical schemes procured by the council that year.

The figures also show the cost of two-bed apartments, which are typically more expensive to build, when developed directly by local councils was on average less than €300,000.

The figures obtained from the department are significantly less than this and suggest that many local councils could pay far less to deliver housing themselves than paying for so-called turnkey purchases or Part V acquisitions, which are bought directly from private developers to house social tenants.

The most high-profile example is the Cairn Homes development of the former RTÉ site at Donnybrook in Dublin 4.

Cairn has agreed in principle a €30.2 million deal to sell 61 apartments to Dublin City Council for social housing as part of its Part V obligation to allocate 10 per cent of any new private development to social housing. That values two-bedroom apartments at €521,377 and one-bed units at €472,797.

“Where land is available, actual construction, de-risked from speculative markets and high-cost finance, is affordable, ” University College Dublin academic and housing expert Orla Hegarty, who obtained the figures, said. This is confirmed by the department’s own figures, Ms Hegarty said.

“These prices make a nonsense of what councils are paying for Part Vs and turnkeys,” she said.

“If you want to build affordable housing in Ireland, how you go about it is really important,” Ms Hegarty said. “What we’ve got at the moment is a system whereby we rely very heavily on developers, which is just one way of buying housing, and their way of buying housing is largely to do with maximising the land value,” she said.

The SCSI report published in July said construction costs accounted for less than half the overall €371,000 average cost of building a three-bedroom home.

The SCSI said the increase was primarily driven by an increase in “hard costs” – the bricks and mortar element of construction – which rose by 19 per cent or €29,000 during the period.

The so-called “soft costs” – land, development levies, professional fees, VAT and developers’ margin – increased by 7 per cent or €12,000, it said.

However, these soft costs accounted for 52 per cent or €192,000 of the €371,000 total, underscoring the notion that development costs rather than construction cost are behind the high cost of housing in Ireland, it said.