New ‘Guinness quarter’ will include space for housing, offices, shops and businesses 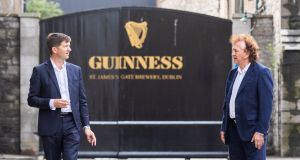 Diageo has picked Sean Mulryan’s property development company Ballymore to develop part of the Guinness Brewery in Dublin as a new urban centre.

Guinness’s parent, Diageo, announced plans in 2017 to redevelop 12 acres of its complex at St James’s Gate in central Dublin for housing, offices, shops and businesses.

It was understood that a shortlist of developers for the site included US multinational Hines, London-based U&I and Ballymore.

In a statement on Thursday, Diageo said that, alongside Ballymore, it intends to develop the so-called Guinness Quarter as Dublin’s first “zero carbon district”. That means existing buildings will be re-used while the possibility of renewable energy installation will be examined.

In addition to the spaces for living, working and shopping, the area will include public spaces.

While it has previously been reported that the development has a commercial value of about €1 billion, Diageo noted that “the overall project cost is unknown at this stage”. They said it will as that will “ultimately be a function of developing the masterplan and the planning consent secured, which following extensive public and stakeholder consultation, will be a matter for the planning authority to determine”.

Engagement with the local community is expected to commence so that both Ballymore and Diageo can develop a masterplan for the area.

“As we move into the next chapter of this 261-year-old brewery, we are very excited about the possibilities of creating a quarter that will form part of the fabric of the city for generations to come,” said Oliver Loomes, managing director of Diageo Ireland.

Ballymore chief executive and chairman Sean Mulryan said that company is confident it can deliver, having “40 years of experience in delivering complex urban regeneration sites”.

Ballymore is redeveloping a substantial portion of Dublin’s docklands in partnership with Singaporean company Oxley, and has developed a substantial plot of land in London, London City Island, in addition to its Nine Elms development, also in London. It is also involved in a development known as Connolly Quarter, which will see it develop 741 new homes in Dublin city centre, adjacent to Connolly Station.

Diageo plans to keep a number of key buildings in the quarter, including Arthur Guinness’s home and St James’s Gate itself.