Demand for starter homes buoys Glenveagh in first half 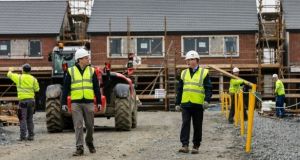 Irish house builder Glenveagh Properties says it will have capacity to deliver 1,000 housing units in 2021 as demand for starter homes defies the ongoing Covid-19 pandemic.

In an interim update on Tuesday, Glenveagh said it closed 123 units in the first half of 2020 across 12 sites, raising €37 million in revenue, despite lengthy closures caused by the coronavirus pandemic. That compared with 153 in the same period of 2019.

Glenveagh’s sites were shut down on March 29th as the Government introduced restrictions to try to limit the spread of coronavirus. They reopened on May 18th on a phased basis. That reopening focused on completing units that were either sold or signed.

“As we move forward, we need to be conscious of further restrictions that could be introduced, or where there might be outbreaks across certain communities,” chief executive Stephen Garvey said. “I think Covid has been a difficult thing to deal with and one thing we can say is that the construction sector overall has embraced the change as well.”

Overall, the group has sold, signed or reserved 906 units, excluding the private rented sector, and said it expected to deliver about 650 units this year, provided there were no further Covid-19 restrictions.

“The continued strong demand from our private customers on the group’s starter-home developments and the robust performance of the private rented sector during the period is encouraging. Private reservation rates are progressing well and are up 213 per cent year on year for June to August,” Mr Garvey said.

“Our ambition remains to scale the business to 3,000 plus units in a prudent but expedient manner.”

Glenveagh also said it had been awarded its first tender, with the company being selected as the preferred bidder for the Oscar Traynor Housing Initiative by Dublin City Council, which will see the development of a residential quarter on the site around five kilometres outside the city centre.

The house builder’s operating loss for the period was €5.6 million, which it attributed to the pandemic. The company said it restricted spending on development land to preserve as much cash as possible.

It also has a further €125 million of uncommitted facilities.

The group said accelerated sales of non-core, high-end, private developments and sites would deliver more than €100 million of cash flow within 12 months, resulting in a €20.3 million asset impairment.