Study questions whether industry can deliver 40,000 housing units being promised 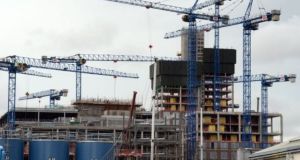 The Irish construction sector is now under “Celtic Tiger levels of pressure” and at risk of overheating as a result of a significant acceleration in wages and prices, a new report has warned.

The study by property consultants Mitchell McDermott also questioned whether the industry had sufficient manpower to build the 40,000 housing units being promised by politicians to address the current housing crisis.

It comes as the Construction Industry Federation (CIF) warned that election promises by political parties to build more housing would not be realised unless the cost of building was addressed.

It is looking for lower densities outside of Dublin and a State-backed shared equity scheme to make home-buying affordable for an “average couple”.

The Mitchell McDermott report estimates that construction output grew by 12 per cent to €23 billion last year while the number of construction workers grew by only 6,000 or 4 per cent. This has pushed wage costs higher, it said.

“Output is outstripping our already constrained supply chain, and this is a worrying trend going forward,” lead author Paul Mitchell said. “Construction prices increased by 6.6 per cent in 2019 and we expect them to rise by between 5 and 6 per cent in 2020,” he said.

The study suggested that an office building costing €20 million to build in 2015 would cost €25 million at the beginning of 2020, an increase of 26 per cent, on foot of rising costs.

The report highlighted a significant pick-up in the number of planning permissions for apartments last year, 19,000 in all.

“If they all do go ahead, it will amount to a doubling of our current residential output in two years to just under 40,000 units,” Mr Mitchell said.

“Indeed, several political parties in the run-up to the election are promising that this will be the State’s housing output for the next five years. That’s 200,000 new units in total,” he said.

“Given the constraints in the sector, the key question is who will build these units? We estimate up to 30,000 additional workers would be required to reach that level of output,” he said. The CIF says the sector will require 100,000 more workers in the coming years.

Currently there are about 150,000 people employed in construction. The figure was more than 200,000 at the height of the boom.

Of the various building sectors, the report said hotel and office construction are reaching full capacity, while there is still strong demand for student accommodation, which is facing viability and affordability issues.