Cairn Homes gets permission for 426 homes near Greystones

Delgany development to include 245 houses and 181 apartments 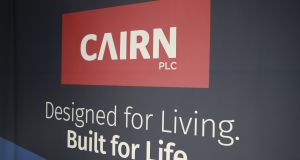 An Bord Pleanála has given Cairn Homes permission to construct 426 residential units near Greystones in Co Wicklow.

The appeals board granted the developer planning permission in a fast-track process despite local opposition.

The planned development is on a site within the townlands of Farrankelly and Killincarrig, Delgany located 2.5km south of Greystones. It is comprised of 245 houses and 181 apartments. The plan includes three four-storey apartment blocks at its centre.

The appeals board received 18 submissions on the plan from locals, local councillors and local sports clubs.

Objectors claimed that the project would not be developed in a sustainable way and would lead to a heavy reliance on cars.

A number of councillors supported the proposals but others claimed that the density would be excessive and that the scheme would be visually obtrusive and incongruous.

However, the executive of Wicklow County Council backed the plan.

The executive said the four-storey apartments at the centre of the development were considered acceptable and would comply with the national guidance.

Now, the appeals board has upheld the recommendation of its inspector in the case, Karen Hamilton, to grant planning permission.

The board has ruled that the proposed development would not seriously injure the residential or visual amenities of the area or of property in the vicinity and would not detract from the character or setting of the adjacent protected structure.

The developers were seeking a 10-year permission to complete the development, however the appeals board has ordered that the development be carried out within seven years.

As part of the planning permission Cairn Homes is required to sell 42 units in the proposal to the local authority for social and affordable housing.

Cairn Homes recorded pretax profits of €21.3 million on revenues of €192.4 million in the 12 months to the end of June last.