Company says it will increase share buyback programme to €60m 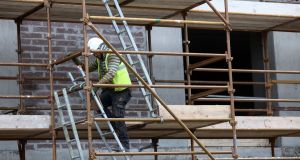 Irish homebuilder Cairn Homes said revenues rose 29 per cent to €434 million in 2019 as it put in a strong sales performance, and announced it would increase its share buyback programme.

Excluding non-core site sales, revenues were €402 million for the year, up 37 per cent. Operating profit is expected to increase by 28 per cent to €68 million.

The company also said it would increase its current share buyback programme, announced in September at €25 million, to €60 million. Cairn Homes will declare a final dividend in March 2020.

“2019 was another year of exceptional execution by our talented team at Cairn. We increased our revenues to circa €434 million, moved 1,080 customers into their new homes and we start 2020 with 740 homes already forward sold,” said chief executive Michael Stanley. “With more certainty around Brexit, the robust performance of the Irish economy and the fact that housing supply still falls significantly short of demand, we believe our business model is well positioned to take full advantage and we look forward with real confidence to 2020 and beyond.”

Full year results are due to be announced on March 3rd, 2020.

Looking ahead, the company said it expected to generate around €500 million in free cash to the end of 2022.

1 Getting out from under ‘never-ending’ Celtic Tiger debt burden
2 Brittany Ferries ends Cork-Santander route
3 Pensions: Estonia plans to unleash a potential €4.85bn on economy
4 Fair Deal nursing homecare leaves little for bills and gifts
5 Explainer: what is the row about SF’s multinational tax plan?
6 Britain after Brexit will not be alone, but it will be lonelier
7 Banks withdrawing from ATMs – another failure of regulation
8 Personal insolvency practitioner to pay €6,000 after providing misleading details
9 Brittany Ferries announces new services to Spain and France from Rosslare
10 Election 2020: Parties' pledges on housing simply don’t add up
Real news has value SUBSCRIBE