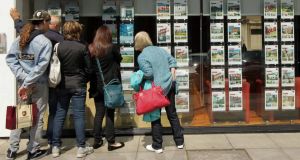 In a pre-election submission lobby group CIF called for the establishment of a State-backed loan scheme to help first-time buyers over the deposit hurdle.

The industry body representing housebuilders has called for the introduction of a Government-backed shared-equity scheme to help first-time buyers (FTBs) get on the property ladder.

The Construction Industry Federation (CIF) said the current mortgage-lending rules, which restrict lending for most borrowers to 3.5 times income, were too onerous and left many couples in a state of “rental purgatory” – paying high rent while unable to save for a deposit.

In a pre-election submission, it called for the establishment of a State-backed loan scheme, over and above the existing help-to-buy scheme, to help FTBs purchase a home.

This would involve the State taking a small stake in newly-built houses to reduce the level of deposit required to secure a mortgage.

Under the proposals, buyers would buy their home in stages, with the State varying its stake in the initial purchase from 10 per cent to a maximum of 40 per cent depending on the borrower’s circumstances.

CIF said share-equity schemes are effectively loans, not grants, and therefore over time as purchasers’ circumstances change, they could either remortgage or sell their property and redeem the loan with the cash going back into the fund.

The federation said this would allow couples on joint incomes of €70,000 and above to access the market, while reducing their reliance on other State supports such as the housing assistance payment (HAP).

In its submission, CIF noted that expenditure on HAP has grown rapidly in recent years and was likely to hit €1.4 billion this year.

This money would be better spent on a shared-equity scheme as it “would increase the number of people who can realistically secure a mortgage” while reducing the numbers renting and taking people off social housing waiting lists.

“It would also enable homebuilders to secure finance to build and increase supply,” it said. The increased housing supply would also generate further revenue for the exchequer while alleviating the housing crisis, it said.

The lobby group said a couple earning €94,000 combined are currently unable to secure a mortgage for the average home in Dublin, priced at €386,000.

This is reflected across the country with national house prices averaging €325,000 requiring a combined couple income of more than €80,000, it said.

But this was leading to strong sales in the first half of any given year before a significant drop-off in the second half, the federation said.

“This has had an undesired effect on FTBs, forcing them into longer-term rental where they then get caught in rental purgatory, paying high rent and all the while they cannot save for a deposit,” it said.

“If this issue is not addressed, we are creating the new ‘poverty trap’ for the future retirees,” the group said.

It claimed homebuilders particularly outside Dublin are struggling to deliver houses and apartments as the guidelines dictated a minimum of 35 units per hectare.

“To achieve this, homebuilders in the regions must build too many apartments in developments; this is not financially viable and curtails any homebuilding in areas outside Dublin,” it said.

“Introducing flexibility on densities on a regional or market basis would maintain construction quality whilst allow regional homebuilders to secure finance to build much-needed homes around the country,” it said.

1 Knock gets visit from world’s largest passenger plane
2 Exposed to coronavirus: How Irish business is coping with fallout
3 Ires doubles down on building plan, Dr Pepper for Kildare, and staycations for all
4 Galway development could transform skyline with 21-storey tower
5 A maverick taking on the Irish whiskey establishment
6 Fáilte Ireland launches €6m campaign to boost holidays at home
7 Planning permission refused for major new office block in Galway city centre
8 How do you know if you are wealthy? It’s not straightforward
9 Ires Reit to build 600 apartments despite political uncertainty
10 Dr Pepper owner in talks to take over former Lidl distribution centre
Real news has value SUBSCRIBE