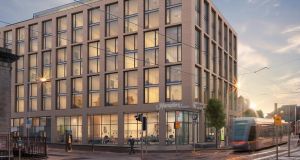 Located next to the Four Courts in Dublin, the Hampton by Hilton Riverhouse Hotel is set to comprise 249 bedrooms.

Commercial real-estate adviser Savills Ireland has estimated that Dublin’s hotel development pipeline will decline by up to 32 per cent as a direct result of the Covid-19 pandemic.

While the boom in visitor numbers to the capital over the past decade has seen the addition of some 4,000 new hotel bedrooms, the immediate impact of the coronavirus on the tourism sector has prompted Savills to reduce its previous forecast for the delivery of 5,926 new rooms between March 2020 to the end of 2022, to 4,057.

Commenting on the numbers, Tom Barrett, director at Savills’ hotel division, said: “Just a few weeks ago, before the current restrictions, Savills visited Dublin hotel construction sites to observe physical progress. Based on these visits – and our own analysis – we expect hoteliers, developers and investors will complete most projects that have commenced construction, although the delivery and opening dates will slip.”

While Savills’ analysis suggests that the majority of the hotel bedroom stock which had been scheduled for completion between now and 2022 will still be delivered, the report notes that the “probability of opening is greatest for hotels that are already significantly completed, with a greater risk of delay and repurposing for sites that have not commenced, or are in the very early phase of development”.

A closer examination of the figures shows that of the 1,150 new hotel bedrooms which had been due to open this year, more than 90 per cent of these new hotels had their top floor, or full facades and glazing in place prior to last Saturday’s closure of construction sites.

Savills says it expects the completion dates for these hotels to slip into 2021 should the Government’s restriction on non-essential construction work continue for longer than expected.

Of the 2,200 new hotel bedrooms which had been set to open in 2021, the report finds that only 25 per cent of these hotels had reached the top floor before their sites were closed. The prospects of these projects being discontinued remains low, however, with Savills noting that “very significant work has been completed on all of these hotels”.

Looking towards 2022, the report says: “The hotels which we forecast might open in 2022 are at early stages of construction, therefore Savills has significantly reduced its overall forecast for that year.

“With a reduced development forecast for Dublin hotels, we believe new hotel development in Cork, Galway, Limerick and regional Ireland will be more difficult to deliver in the coming years.”