Investors are always scared during bear markets but this is different 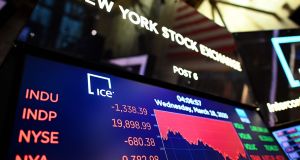 US stocks have experienced their fastest-ever move from all-time highs to a bear market. Photograph: Johannes Eisele/AFP via Getty Images

The longest bull market in history has been followed by the fastest bear market in history. No two bear markets are the same and the current one is unprecedented in many respects, but they all share certain core features, namely that fear is rampant and prices are falling.

Can history guide investors through the current market turbulence?

The S&P 500 has declined by an average of 34 per cent in the nine recessionary bear markets since the second World War, says Ritholtz Wealth Management’s Ben Carlson. The good news is that, with stocks having already declined some 30 per cent, “we’re right there in terms of the average bear market if there is such a thing”.

Unfortunately, averages can mislead. Carlson says that in a run-of-the-mill recessionary bear market, stocks retreat by an average of 27 per cent, but an analysis of the worst market crashes shows things can get much more severe. The S&P 500 has roughly halved in value (or worse) on five occasions. There have been three such bear markets over the last five decades – in 1973-1975, 2000-2002, and 2007-2009. The other two occurred during the 1930s depression.

Right now, the hope is that any recession will be a short-lived affair, but that’s far from certain. Dr Traderfeed blogger Dr Brett Steenbarger, a professor of psychiatry who also coaches hedge-fund managers and traders, asks what will happen if Covid-19, like the infamous 1918 flu pandemic, comes back next year in an even more virulent form?

It is, he adds, “a worthwhile question to ask whether this is a recession in the making or something more generational in its impact”. A global depression is not likely but nor is it remote, says Guggenheim Partners’ Scott Minerd, who says there is “at least a 10 per cent or 20 per cent chance of that”.

In short, if this turns out to be an average recessionary bear market, any further market damage is likely to be limited. If not, investors need to brace for further large declines.

How freaked are investors?

Very. The Vix, Wall Street’s fear index, recently topped 80 for the first time since the fall of Lehman Brothers in 2008. That’s a truly extreme reading; ordinarily, markets are deemed to be very nervy when the Vix tops 30. Aside from the global financial crisis, the Vix has never topped 50, not to mind 80, over the last three decades.

Fund managers, too, are spooked. The latest Bank of America monthly fund manager survey shows that equity allocations and global growth expectations have suffered their biggest monthly drop on record; global earnings expectations have hit their lowest level since October 2008; cash allocations have experienced their fourth-biggest monthly jump on record; and sentiment is close to the bearish extremes witnessed in 2008-2009.

Unsurprisingly, all this fear is mirrored in price movements. US stocks have experienced their fastest-ever move from all-time highs to a bear market. Absolutely wild swings have become an everyday occurrence.

Sundial Capital’s Jason Goepfert notes that, over a recent one-week period, the S&P 500 futures gapped open an average of more than 5 per cent from the prior day’s close. “It’s never been higher,” says Goepfert, “even during the depths of 2008.”

Investors are always scared during bear markets but this is different – we rarely see fear of this magnitude. Extreme levels of fear are associated with investor panic and contrarians generally see these episodes as obvious buying opportunities, although the counterargument is that the speed of the market downturn merely reflects the scale of a crisis that is, as veteran investor and Research Affiliates founder Rob Arnott says, “evolving faster than any in my lifetime”.

How long will the bear market last?

This has been the fastest bear market in history, so the hope is that the recovery will be similarly swift. Markets can “bounce back quickly”, says influential Allianz economist Mohamed El-Erian – a take that may relieve some investors, given that El-Erian has been warning for some time that markets were underestimating the danger posed by Covid-19 and advising investors not to buy any dips.

According to Dow Jones Market Data, the average bear market for the S&P 500 lasts 146 trading days. After stocks enter a bear market – defined as a fall of 20 per cent – it takes another 83 trading days for stocks to bottom, on average.

Of course, some bear markets are shorter than others. The biggest one-day crash in history occurred on Black Monday in October 1987 but that turned out to be a brief bear market, as was the bear market that accompanied 1990s mild recession.

Still, if you were unfortunate enough to invest at February’s market peak, you might have to wait a while before you get back to break-even. In the modern era, the average break-even period has been about 17 months, says Ben Carlson. His data shows that half of all bear markets have seen break-evens lasting less than a year while a third have taken two years or longer.

How relevant is history?

Nobel economist Robert Shiller is famous for calling both the dotcom crash of 2000 and the housing crash that catalysed the global financial crisis. In both instances, Shiller cited historical valuations as evidence that prices were at unsustainable levels, but is less certain as to how investors should handle the current situation. “We are just in uncharted territory,” says Shiller. “I don’t know how to bring historical insights into where we are right now.”

The recent market crash is different to previous downturns. “The thing that is scarier about it is you’ve never been in a scenario where you shut down the entire economy,” Steve Chiavarone of Federated Investors recently told Bloomberg. “You get a sense in your stomach that we don’t know how to price this and that markets could fall more.”

Still, while the future is unknowable and things may get much worse before they get better, investors should remember that bear markets “are periods when stocks are transferred from weak to strong hands, as does wealth when recoveries occur”, says US investment adviser and author Larry Swedroe.

His message is echoed by Marc Westlake of Dublin-based Global Capital. History shows that investors who stay the course are rewarded while those who panic and go to cash lock in their losses, says Westlake.