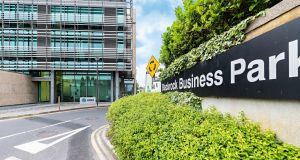 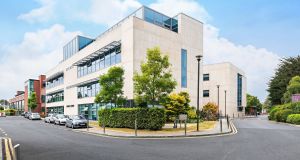 A portfolio of three modern office blocks at Blackrock Business Park in south Co Dublin is guiding €17 million through Savills, which would reflect a net initial yield of more than 6 per cent.

The buildings are fully let to seven tenants and produce a rent roll of €1.2 million with a weighted average unexpired lease term of 4½ years to a break option and 8½ years to expiry. The average passing rent comes in at about €244 per square metre (€22.68 per square foot), which would be below the going rate in the area – the most recent letting in one of the blocks was to Kobo Software at €323 per square metre (€30 per square foot) on a 10-year lease. Tenants are active in the financial, IT, helicopter fleet management and healthcare sectors.

Full planning permission was granted in 2017 for an additional penthouse level to Block 4 of 427sq m (4,596sq ft), where building services are already in place.

Blackrock Business Park is within walking distance of the Dart and bus routes. The N11 and M50 are a short drive away, while the town is undergoing a minor building boom, with extension works to the Frascati shopping centre almost complete and a new 8,083sq m (87,000sq ft) office block being built beside the town’s other shopping centre.