Bloomfield Park homes would produce rent of €178,250 if all of them were rented out 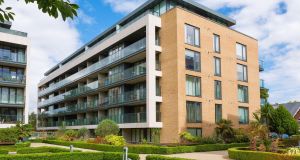 Eight apartments at the high-end Bloomfield Park scheme in Donnybrook are for sale in one lot through Savills at €4.5 million which would reflect a gross initial yield of 5.62 per cent or average price per apartment of €562,500.

The apartments are all two-bed units with an average size of 75sq m (810sq ft) and each comes with a balcony, car-parking space and lift access. Seven of the eight are rented for an annual rent roll of about €156,000 which would rise by about another €22,250 if the eighth home was let.

This Dublin 4 scheme was built at the height of the boom in 2005 and consists of 188 apartments in four blocks. It is off Morehampton Road and within walking distance of Donnybrook village, St Stephen’s Green, good public transport facilities and Herbert Park.

According to the agent, similar apartments in the development sold recently for more than €600,000.