Land has permission for 11-storey block with double basement extending to 12,000sq m 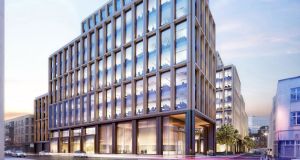 The site of the former Apollo House office block in Dublin city centre, best known for being occupied by protesters on behalf of homeless people, is to be offered for sale by the National Asset Management Agency.

Receiver Mazars has engaged estate agent Savills to handle the sale of the newly cleared site of 0.72 of an acre. It fronts on to Tara Street and Poolbeg Street and might well set a record for the inner city by selling for more than €40 million.

Much of the interest in the site is likely to come from Irish and overseas developers as well as Green Reit and Hibernia Reit because of the ongoing demand for office space in the city and the obvious potential to embark on a substantially larger development. This might well come about by including part or all of the adjoining headquarters of the Department of Health as well as the Marlet-owned former offices of An Post and the Screen Cinema, both fronting on to Hawkins Street.

Another contender for the site might well be Trinity College Dublin: it is within two minutes’ walk of the campus. TCD has a considerable property portfolio in several streets close to the college.

The Apollo site has full planning permission for an 11-storey over-basement office building extending to 12,622sq m (135,863sq ft). The facilities on the ground floor will include retail, cafe and bar and restaurant units.

Designed by architects Henry J Lyons, the new building will feature a double basement providing 40 car parking spaces and storage for 166 bicycles, as well as shower and toilet facilities in the basement. A wrap-around terrace on the eighth floor will provide clear views over the city centre and docklands. There will also be outdoor space available on most of the upper levels.

The proposed block will be a short walk from both Tara Street Dart and the newly opened Luas line on Hawkins Street.

Mark Reynolds of Savills describes the Apollo site as one of the last significant development opportunities within Dublin’s central business district, where he said the demand for space was still particularly strong.

Office-based employment in Dublin over the past two years has expanded by 8.2 per cent, providing jobs for an additional 18,800 workers. The result is that 35 per cent of all jobs in the capital are now spread across the office-denominated sectors.

The vacant Apollo House was first taken over by protestors in December 2016 and repurposed to accommodate homeless people. The occupation ended at the start of February 2017 following a high court application by Nama.