Building has an overall size of about 1,480sq m and nine car parking spaces 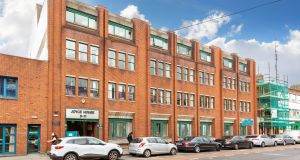 An office building rented by the Office of Public Works and occupied by the Register of Births, Deaths & Marriages on Lombard Street East in Dublin 2 goes for sale from today for more than €8.5 million – a figure that would provide an initial return of 5.25 per cent.

Ross Fogarty of agent Knight Frank is handling the sale of the four-storey redbrick building, which is owned by an overseas investor and known as Joyce House. The second-generation block produces a rent roll of €481,710, which breaks back at just €30 per square foot and €3,000 for car parking spaces on the agreed floor areas. Part of the building is sublet to another State body, the Health Service Executive. The tenants have a break option in the lease that is due to kick in in 2028.

The building has flexible open-plan floor plates of about 341sq m (3,670sq ft) from ground to third floor level, with an overall size of about 1,479sq m (15,920sq ft). With floor plate depths of about 13.5m and windows on both sides, the building benefits greatly from a strong degree of natural light and a bright and spacious working environment.

Comms are provided by way of a mixture of floor boxes and perimeter trunking. Each of the floors has suspended ceilings with recessed lighting, and heating delivered by way of gas-fired central heating via wall-mounted radiators. Vertical access is provided via two stairwells at each end of the building and a newly installed eight-person passenger lift.

Although Lombard Street East remains one of the least impressive city centre streets, there is every likelihood that it will be benefit in the next few years from the ongoing improvements taking place between Pearse Street and the Liffey.