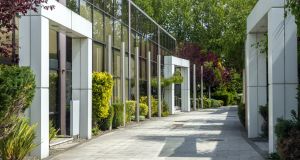 Rotunda IVF, the National Fertility Centre, is moving from its longstanding home at the Rotunda Hospital in Dublin city centre to a new state-of-the-art facility at Swords Business Campus.

The clinic is making the move in order to take advantage of the north Dublin scheme’s location, parking and ease of access to the M50 and national road network. The campus is positioned in close proximity to the M1, five minutes north of Dublin Airport and will be serviced directly by the planned Metro Link which will link the campus directly to St Stephen’s Green in an estimated journey time of 25 minutes.

The owners of Swords Business Campus have in recent times begun to broaden the range of occupiers from the traditional office and office support sectors to those operating in the healthcare and educational space.

Newly-fitted office space at the campus is available at €17.50 per sq ft, or a fraction of the rates being sought in Dublin’s central business district.

Sam Daunt of CBRE and Conor Fitzpatrick of JLL believe the scheme is well positioned to take advantage of any appetite from city centre-based firms to lease hub space to facilitate hybrid or remote working for staff who don’t have the facilities to work long-term from home.

A number of office units, ranging in size from 836sq m (9,000sq ft) to 3,900sq m (42,000sq ft), remain available for letting at the campus. All units offer a spacious open-plan layout and include new air conditioning, suspended ceilings, LED lighting, and bathrooms.