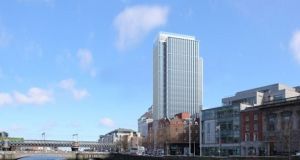 Johnny Ronan’s bid to put offices in place of the hotel he has planned for the 23-storey tower Ronan Group Real Estate (RGRE) is developing on Tara Street in Dublin 2 has been rejected by Dublin City Council.

While RGRE highlighted the “severe impact” the Covid-19 pandemic is having on the Irish hotel market when it sought permission from the council for the change of use in August, the city’s planners have rejected the application.

In explaining its decision, the council has told the developer that the replacement of the Aqua Vetro building’s proposed hotel with additional office space would “detrimentally impact on the dynamic mix of uses within the permitted [Tara Street] scheme and the local area and would negatively impact on the vitality of the inner city location, particularly outside office hours”.

RGRE is expected to appeal Dublin City Council’s decision to An Bord Pleanála in the coming weeks.

Prior to the Covid-19 outbreak, agents representing Mr Ronan’s company had been in advanced heads of terms negotiations with a preferred international hotel tenant for the proposed Aqua Vetro hotel. The leasing process was put on hold however once the severity of the pandemic’s impact on the hotel sector became clear.

But while RGRE doesn’t believe that the delivery of a hotel is appropriate for the Aqua Vetro in the current climate, it had very different ambitions for the Tara Street scheme last November when it sought and secured planning permission to increase the number of hotel rooms in the development from 107 to 157.

The Tara Street tower is one of a number of large-scale projects the Ronan Group is progressing in the capital. Outside of the Aqua Vetro development, the developer and its funding partners, Colony Capital, are involved in the delivery of the Waterfront South Central scheme in the north docklands, and new European headquarter campuses for both Facebook and Salesforce.