Ireland has ‘a number of years of growth ahead of it’, Berenberg analysts tell clients 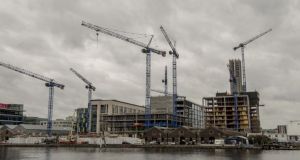 Berenberg analysts focused on the upside for the Irish commercial property sector in their 159-page report. Photograph: Brenda Fitzsimons

German private bank Berenberg has said Ireland’s growing rate of rented accommodation is playing into the hands of Dublin-listed landlord Ires Reit and homebuilder Glenveagh Properties, which has a business targeting the build-to-rent sector.

The bank also told clients that the Irish property trade “remains far from over”.

About 20 per cent of Irish households are currently in rented accommodation, up from 8 per cent in 1991, and the “generation rent” trend will continue as the population becomes more urbanised, workers more mobile, and mortgage restrictions keep home ownership out of reach many, said the Berenberg analysts, including Kieran Lee and Sam Cullen, in a report completed last week and provided by the bank to The Irish Times on Monday.

The analysts have selected Ires Reit, which will have almost 3,600 apartments on its books when it completes its latest acquisition next month, and Glenveagh, which is involved in both housebuilding for sale and developing apartment blocks for companies in the rental sector, as their top Irish property stocks.

They also have buy ratings on shares in office-focus property trusts Hibernia Reit, Green Reit – which is currently up for sale and being chased by three bidders ahead of a deadline on Thursday – and Dalata Hotel Group.

“Having been through the considerable pain of restructuring following the financial crisis, Ireland has enjoyed some of the most rapid economic growth in Europe in recent years,” the analysts said.

“After a period of rapid growth, the inevitable question for many investors is: ‘Have I missed this trade?’ We think not and believe Ireland has a number of years of growth ahead of it,” they said, adding that Irish gross domestic product is set to grow by 3 per cent a year between 2019 and 2022, outperforming Britain, the wider European Union and the United States.

While many commentators, including the Central Bank and the Economic and Social Research Institute (ESRI), have raised concerns about the impact of a hard Brexit on the Irish economy, the Berenberg analysts focused on the upside for the Irish commercial property sector in their 159-page report.

“Come November, Ireland may be the only English-speaking country in the EU,” the analysts said. “Ireland, and Dublin in particular, is well placed to capture any displaced corporate domiciliary demand, especially from English-speaking geographies such as the US or those needing to converse across global time zones.”

The analysts cited recent research from global property consultant Knight Frank highlighting that Dublin is the European market that stands to benefit the most from any Brexit-related relocation, with 86 firms announcing moves to the city, 56 per cent ahead of its nearest competitor, Luxembourg. However, most of the relocations have involved small job transfers from London to Dublin.