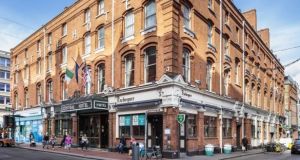 Central Hotel: the 130-year-old business was acquired along with nearby Trinity Street Car Park for an undisclosed sum

One of the Dublin’s oldest hotels, the Central Hotel on Exchequer Street, has been acquired by London-based Deutsche Finance International (DFI) in a joint venture with Dublin-based BCP Capital.

The 130-year-old hotel was acquired along with nearby Trinity Street Car Park for an undisclosed sum.

Estate agent Cushman & Wakefield had placed a price tag of about €40 million on the hotel when placing it on the market late last year.

This is DFI’s first major investment in the Republic and follows the recent close of its inaugural fund, DFI European Value-Add Fund, with €436 million of equity, including co-investment.

The new owners are planning a major refurbishment of the venue to add rooms and improve its food and beverage offering.

The hotel has secured Bord Pleanála approval for a considerable number of structural modifications and, most importantly, an increase in the number of bedrooms from 70 to 112. New owners will also be allowed to enlarge the Library bar on the first floor, create a central courtyard, and install a basement restaurant. Windward Management has been brought in as the hotel operator.

Trinity Street Car Park, which is walking distance from the Central Hotel, comprises 171 car-parking spaces with ancillary retail and office use over five floors. The joint venture plans to enhance the asset’s income by pursuing alternative uses within the property.

“These are our first investments for the Fund in Ireland, allowing us to create value in prime locations and benefit from highly supportive structural trends, including an undersupplied commercial real-estate market; strong GDP growth; and high levels of foreign direct investment,” DFI director Paul Nearchou said.

“Against this backdrop we feel confident in our ability, and that of our partners BCP Capital, to maximise the inherent value in these two prime central Dublin assets,” he added.

Nick Cullen, chief executive at BCP Capital, said: “ By leveraging our expertise of the Dublin market, along with DFI’s experience in operational real estate, these initial investments are expected to deliver significant returns through an active asset management programme.”