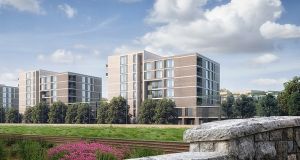 A fund managed by investor Tristan Capital Partners has acquired two ready-to-go development sites in Dublin for €54.5 million, which it will develop alongside local development partners to deliver 663 new homes to the rental market.

Developer Marlet acquired the Cabra site following the collapse of the property market from a group of investors who acquired it in 2004 for about €28 million. While Tristan Capital Partners did not specify the consideration paid for the Cabra site, industry sources indicate the sum paid was around €39 million – well above the €32 million guide price set by agent Savills last September – equating to a site value of about €93,000 per unit. A spokesperson for Marlet declined to comment on the deal.

Enabling works on the site had begun in recent months as Marlet had taken steps to build out the scheme itself, similar to its Harold’s Cross development at Mount Argus, where it has recently agreed a €100 million sale to German fund Patrizia AG for 179 apartments due for completion later this year.

But now that a sale is agreed, Marlet’s involvement in the Cabra site will cease and Tristan Capital Partners has partnered with the Royalton Group, led by Ken Parker, who will act as development manager for the project and eventually operate the scheme upon completion. Walls Construction has been appointed to deliver the project, with a contract value of €100 million, and they are already on site.

In Sandyford, Tristan Capital Partners has teamed up with Twinlite, the development company led by Rick Larkin, to develop a 2.91 hectare (7.2-acre) site on Village Road in Aiken’s Village. Existing planning permission is in place for 243 units, along with a community centre, crèche and residents’ sports hall, and 10 per cent of the residential element will be made available to the local council for social and affordable housing.

Twinlite will manage the development of the scheme and operate it upon completion, in what is the duo’s second joint-venture together, following a forward-funding agreement last year between the investor and Twinlite for 372 units at Clongriffin, north Dublin, worth €140 million, which was the highest value PRS deal of the year.

According to the Land Registry, the Sandyford site’s legal owner since 2013 has been SDR Property Development, an investment vehicle whose directors include Richard McDonagh, son of e-Learning entrepreneur Pat McDonagh.

Given the price paid by Tristan Capital Partners for the two sites, coupled with standard purchaser costs, the construction contract value for Cabra and estimated construction costs for Sandyford, the required investment to deliver both schemes is likely to exceed €200 million, making it one of the biggest investments in the property market this year.

The investor has already assembled a portfolio of 754 rental apartments, including both existing units in Dun Laoghaire and Leopardstown, and the development by Twinlite in Clongriffin, which is set for completion in early 2020. Those acquisitions had a reported value in the region of €281 million. Its latest investments should bring Tristan Capital Partners’ total investment in the Dublin Private Rental Sector market to close to €500 million, with a stock of 1,417 units, making it one of the State’s biggest residential landlords.