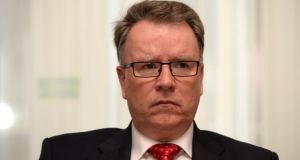 Dalata’s results for the first half of 2017 show that revenue per available room, a key metric in the hotel industry, increased by 9.8 per cent to €82.27.

Asked whether Dublin hotel prices were returning to boom-time prices, Mr McCann said: “From a pricing perspective, Dublin is value for money.” He told The Irish Times that in the years following the boom the domestic hotel market had had an “unsustainable pricing structure” and therefore needed to change to sustain investment in the city.

Pretax profit at the hotel group increased by 80 per cent to reach €32.7 million on the back of a strong hotel market performance and a fall in acquisition costs.

“I am delighted that the momentum built up over the last three years has carried into 2017. We are very focused on both exploiting further opportunities to grow our portfolio while also delivering operational expertise,” said Mr McCann.

While the performance for the group was strong, it pointed to the impact the weakening of sterling has had on UK visitors to Dublin. However, it sees continued high demand for rooms in the city. Conversely, the UK hotel market appears to be “benefiting from the weaker pound,” the company said.

Mr McCann said Dalata is not dependent on the UK transient market and instead is seeing good growth from the UK corporate and tour operator sector. “We’re not nearly as exposed as people imagine we are,” he said.

Dalata announced on Tuesday that it had entered into an agreement to lease a Clayton hotel with about 300 rooms in the centre of Manchester expected to be open by the middle of 2020. It is understood the cost of the lease will be about €8,500 per room.

The company also said it had completed the acquisition of the freehold interest of certain elements of a Clayton hotel in Cardiff and the Clarion Hotel in Liffey Valley, Co Dublin, for €62 million.

The company’s investments in new builds and extensions means it has a pipeline of more than 1,280 new rooms to be opened by 2018.

In the six-month period to the end of June the company invested €17.1 million in new builds and extensions, while it put €8.6 million toward its ongoing refurbishment programme.

Reporting that the second half of 2017 would be a “busy period” for the group, Mr McCann added that a significant IT investment would deliver increased efficiencies and additional revenue for Dalata.

“There is significant IT investment planned for the next 12 months which will deliver a centralised accounting system, centralised payments and a new procurement system, as well as significant upgrades to our property-management systems and website user interfaces.”

The company, which has a portfolio of 38 hotels, identified its principal risks for the remainder of this year as geopolitical events and sterling fluctuations.

However, the company again downplayed the importance of UK visitors to its Irish hotels, saying that 85 per cent of its Dublin hotel rooms are sold to either domestic customers or customers from countries other than the UK. Mr McCann told The Irish Times any loss of UK visitors is being offset by consumers from Europe and the United States. He underlined the importance of Ireland’s regional airports, saying their performance is tied to the hotel industry’s performance.

On the ongoing debate surrounding the 9 per cent VAT rate for the tourism industry, Mr McCann advised commentators not to look at Dalata’s results as a measure for Ireland’s hotel industry as a whole. “Hotels in the regions have seen little or no recovery,” he said, while advocating that the VAT rate remain unchanged.

In a client note, analysts at Investec said they would review their numbers on Dalata after “another positive set of results”.

“We remain positive on the stock given the strong economic backdrop in Ireland, an ongoing shortage of hotel rooms in Dublin (as evidenced by very high occupancy rates) and a surge in tourist numbers from North America,” they added.