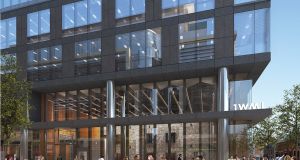 Artist’s impression of 1 Windmill Lane, where Core Media and Informatica are set to become tenants.

Property investment fund Hibernia Reit said on Monday that it has let 24,000 square feet in its 1 Windmill Lane development to Core Media, a marketing communications group, for € 57.60 per sq ft .

Core Media will occupy the third floor of 1WML and six car parking spaces on a 21 year lease, with 12 years term certain. It will pay initial rent of € 1.4 million a year, including annual contributions to the reception and townhall areas and car parking, and will receive six months rent free. Core Media also has an office on nearby Sir John Rogerson’s Quay.

Hibernia previously announced the letting of 36,000 sq. ft. on the fourth and fifth floors of the building to Informatica.

With Core Media ready to take up the third floor, Hibernia has now let 50 per cent of the building, and said it is in discussions with other potential tenants regarding the remaining space.

“The reit has delivered an innovative building, on time and 50 per cent pre-let. Furthermore, the long lease term achieved for the Core Media letting further de-risks this development for Hibernia and the reit is likely to see a further yield boost from this letting,” he said.

The property fund recently said that it benefited from “exceptionally high” office and leasing activity in the three months to the end of June. By the end of June, the Irish Stock Exchange-listed company had net debt of € 167 million and cash and undrawn facilities of € 277 million.