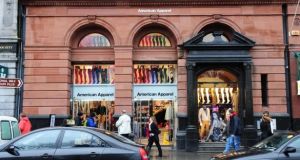 The building on Grafton Street which used to operate as American Apparel is undergoing structural changes so it can be re-let. Photograph: Aidan Crawley

Owner Irish Life is carrying out a number of structural changes to the former American Apparel store near the bottom of Dublin’s Grafton Street before it can be re-let. The US chain ceased trading at the start of this year.

The changes under way in the former bank building are designed to reduce the impact of three pillars close to the front of the shop and improve accessibility on the ground floor, which extends to 209sq m (2,250sq ft). The five-storey, over-basement building has an overall floor area of 836sq m (9,000sq ft) and scope to trade on three levels.

James Quinlan of agent Bannon is quoting a rent of €550,000 for the store, which is located along one of the busiest stretches of Grafton Street.

A multi-let office investment at Castle House, Rathfarnham, Dublin 14, has been bought by a private investor for €1.95 million – €350,000 above the guide price.

Jane Dolan of Cushman & Wakefield handled the sale of the purpose-built block dating from the 1990s, which has an overall floor area of 834sq m (8,985 sq ft). The five tenants paying an annual rent of €127,250 are Permanent TSB Bank, Corporate Underwriting Ltd, Insights World Learning Ltd, Enigma Grill and a residential tenant. There are more than eight years to run on the five tenancies.

DNG’s advisory division is guiding €750,000 for a site of less than half an acre off Main Street in Lucan, Co Dublin, with planning permission for nine residential units.

The planning permission provides for six two-bedroom apartments ranging in size from 77sq m to 84sq m, one four-bedroom detached house with a floor area of more than 131sq m, and two four-bedroom semi-detached houses extending to almost 114sq m.

The Lucan site,which will be sold by tender on October 12th, is located close to shops and restaurants as well as schools. It is less than 14km from Dublin city centre.

O’Mahony Auctioneers is seeking in excess of €400,000 for a used car sales yard at Church Avenue, Rathmines, Dublin 6. The freehold walled yard extends to 388sq m (4,185sq ft) and is let to Kingsdeen Ltd under a 20-year lease to the end of January 2023. The current annual rent of €20,000 is expected to show a significant increase at the next review on February 1st. Commercial rates on the site this year will amount to €1,728.

Commercial agents Cushman & Wakefield have announced the appointment of Tom Carthy as head of agency in Ireland. He joins the company from BNP Paribas Real Estate, where he worked since 1989 and fulfilled the role of executive director responsible for overseeing the agency’s transaction and consultancy business.

Aidan Gavin, managing director of Cushman & Wakefield, said the company was delighted that Carthy was joining them at such a critical juncture in the property market.

Co Meath petrol station with shop and bungalow for sale

A petrol filling station let to Applegreen at Enfield, Co Meath, along with a convenience store and a detached bungalow, will be offered for sale at €1 million through Cushman & Wakefield.

The filling station is let on a 21-year lease from 2007 at a rent of €90,000 per annum. Five yearly rent reviews are linked to the Consumer Price Index. The bungalow is located on part of the half-acre site and is in need of modernisation.

John Carrigan of Cushman & Wakefield said he expected that the location, asset management potential and the tenant covenant would attract considerable interest. The purchaser could expect as net yield of 8.61 per cent

CBRE is quoting €1.8 million for a Georgian office investment at 19 Herbert Place, Dublin 2, which is let to Mullany Mawell Solicitors at an annual rent of €76,000.

The four-storey, over-basement building extends to 334sq m (3,500sq ft) and has four car parking spaces in an adjoining yard. The property also includes a vacant and well-maintained two-storey mews building with sittingroom, kitchen, bathroom and two bedrooms. The most notable hotels close by are the Schoolhouse, Mespil and the Dylan.

Hendrik van der Kamp, former president of both the Irish Planning Institute and the European Council of Spatial Planners, has joined RW Nowlan & Associates as a consultant.

A former senior inspector with An Bord Pleanála, van der Kamp brings more than 30 years of planning and development experience to Nowlan, which has been in operation for two years. The company is a leading provider of planning and property advisers services, working with organisations in banking, legal, retail, development and housing associations.

The company is headed up by Robert Nowlan, who has more than 17 years’ experience in this sector. He previously worked with HWBC chartered surveyors and Declan Brassil and Company.

Three new retail tenants have been lined up for Citywest Village Shopping Centre in southwest Dublin.

Citywest Village is anchored by Dunnes Stores and has a mix of stores, including a pharmacy, dry cleaners, newsagents, post office, barbers and a medical centre

Colin Kavanagh of Savills said that with footfalls increasing steadily at the centre, he expects a good demand for a few units remaining unlet.

New appointment at Savills
Savills has strengthened its development land team with the appointment of Ebba Mowat, who was previously based in Scotland. After working as an undergraduate with Savills in Edinburgh, Mowat moved to Glasgow, where she served with the investment team. Before joining Savills she spent a year with City Property Glasgow LLP, a property division of Glasgow City Council. Savills Ireland now has 12 full-time staffin the development and consultancy division which is headed by Mark Reynolds.