Investment market turnover of at least €2.7bn in 2020 represents a ‘solid’ performance 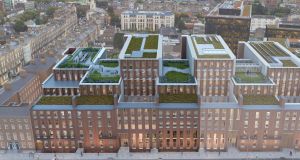 Ireland’s property market, and specifically the commercial and private rented sector (PRS), in this year of years, has been characterised by resilience. This bodes well for short-term performance overall – but each sector faces challenges of varying degrees of difficulty.

Unsurprisingly, the office sector took a significant hit. Take-up, which is likely to be in the region of 1.6 million sq ft this year, with 1.1 million sq ft of this of this contracted pre-Covid-19, has fallen on the back of Covid-19 restrictions and occupiers postponing expansion decisions. The previous 10-year average was 2.5 million sq ft. The sector also faced major questions as to the future of the office, following announcements from Facebook, Twitter and Google on their long-term plans for working from home.

But occupier demand is increasing as companies have realised the importance of the workplace for efficiencies and collaboration, as they now encourage their teams back to work. The outlook for the sector in 2021 is already looking positive.

PRS also faced issues arising from an uptick in unemployment and a lockdown of the economy. This highlighted the question of affordability. However, across the Savills residential portfolio, we had a rental collection rate of 97 per cent, which demonstrates the attractiveness of the sector as an investment even during a recession.

Total investment market turnover for 2020 is expected to be about € 2.7 billion. While this is down from the peak of € 7.4 billion in 2019 and a 10-year average of € 2.9 billion, it is a considerably-solid performance during a pandemic. We have seen, at the prime end of the office market, yields holding firm. Despite ongoing restrictions due to Covid-19, French asset manager Amundi acquired 28 Fitzwilliam, while German investment firm Deka Immobilien acquired Baggot Plaza, with a combined spend of more than € 300 million between them.

PRS is the most liquid investment we have seen. The sector will turn over approximately € 1 billion this year, or 37 per cent of the total turnover. There is also approximately € 1.5 billion on the market. Despite the increased supply, we are coming from a small base and Ireland remains under supplied with residential delivery. While this is well known, from an investor perspective, with one of the lowest urbanisation rates in Europe (at 63 per cent), and with Dublin experiencing the fastest population growth of any city in Europe, it makes a compelling case for further international investment into the sector. In particular, there is an acute shortage of supply of affordable units.

There has been little activity in the retail sector, which was to be expected given the advent of online retail and store closures due to lockdown. Turnover in the sector for the year will be only approximately € 80 million.

Although small when measured by turnover, the logistics sector looks set to be one of the best performers in this current cycle, with yields over the last year compressing from 5 per cent to low 4 per cents in less than a year

Overall, the outlook for the investment market is positive. Progress on a Covid-19 vaccine has provided certainty that an end to the pandemic is in sight. The prospect of long-term, very low interest rates has yet to feed into pricing as there are other economic factors at play. The debt markets contracted significantly during the pandemic. However, once they reopen with low-cost debt, yield compression should offset any price pressure caused by any downward rental pressures.