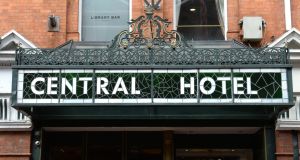 Dublin City Council had given permission for a substantial expansion of the Central Hotel. File photograph: Dara MacDónaill/The Irish Times

Plans for a new hotel development for Dublin city centre that will spell “last orders” for well-known Dublin venues Rí-Rá nightclub and the Globe bar have been put on hold.

Three separate appeals have been lodged with An Bord Pleanála against Dublin City Council giving the green light for the plans for a major expansion of the Central Hotel on South Great George’s Street and Dame Court into a new 6,554sq m five-storey hotel with 125 bedrooms.

Rí-Rá nightclub would have become a “speak-easy” with the Globe a retail outlet.

As part of the application by Exchequer Developments Ltd, the existing Library Bar is going to be reduced in size to make way for additional bedrooms.

The three parties to appeal are Philip O’Reilly, Rodney Senior and Colin Galligan.

Philip O’Reilly of Grosvenor Place, Rathmines, objected to the proposal as far too radical for such a historic structure, that it should not be permitted. Mr O’Reilly said a hotel expansion to 125 rooms at this time defies “logic”. The tourism industry is on the floor, he added, “and the city is awash with unoccupied hotel rooms and this scenario is not going to change anytime soon”.

Dr Colin Galligan’s objection, lodged by Hughes Planning and Consultants, argues the application, if granted, will mean viable retail units lost. The development will result in a proliferation of non-retail and night-time associated uses, leading to the further degradation of the retail core, he further argues.

In another objection Green Party Cllr Claire Byrne told the council: “We have already witnessed an excessive erosion of our club culture in the city in particular over the past few years, mostly to make way for hotels and student accommodation.”

Cllr Byrne added: “We are running out of places to dance.”

“The proposal retains a night time use in the basement, retains the Library Bar and . . . will ensure a balance between shopping, leisure and cultural, and that non-retail uses will not dominate this section of South Great George’s Street.”

Partners in the venture BCP Capital said earlier this year that the scheme would result in a significant net increase in bar and restaurant space.

A BCP spokesman said at that time that the current Rí-Rá nightclub space would remain as a bar/nightclub, “and the much-cherished Library Bar will also remain a core part of the hotel and its identity”.

A decision is due on the appeal in April.