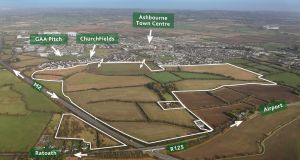 Agent Coonan Property has secured a price of about €7 million, or about €30,000 per acre, for a 241-acre landbank on the outskirts of Ashbourne in Co Meath.

While the sale of Killegland Farm is understood to have attracted interest from a number of domestic and international parties, the “Mooney land”, as it is also known, was sold to a private Irish investor following a “best bids” process.

The subject property currently consists of a six-bedroom residence, outbuildings and a mews on 241 acres of free-draining land, which has been farmed successfully over a number of years by the Mooney family.

Although the lands would appear to offer significant potential for future residential development owing to their location immediately south of Ashbourne town and next to the M2 motorway and R125, they are zoned for agricultural use currently. Any question of their being rezoned for housing is something that is likely to be addressed in the medium to longer term as the deadline for submissions in relation to the Meath County Development Plan 2021-2027 expired earlier this year and prior to the property’s sale.

The purchaser of the Killegland Farm land was represented by Paul Grimes of REA Grimes.

Philip Byrne of selling agents Coonan Property said: “There was huge interest in this property from the start from both Irish and international investors due to its obvious future development potential.”

While the buyer of the Mooney land paid a strong price of €30,000 per acre, the figure pales alongside the €263,000 per acre which had been sought when it was brought to the market previously in 2007.

On that occasion, the then selling agents placed a guide of over €60 million for a slightly smaller holding of 228.19 acres in the expectation that it would be “rezoned in the not-too-distant future”.