CBRE: No recession in sight for 2020 despite slowdown in global and employment growth 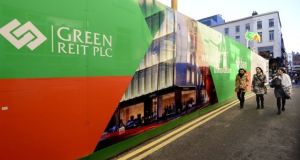 Record investment spend was recorded in the Irish market during 2019 as a result of the €1.34 billion Green Reit sale. Photograph: Cyril Byrne

Despite continued uncertainty around Brexit and the geo-political noise that dominated the news agenda during the last 12 months, 2019 proved to be another strong year for the Irish commercial property market both from an occupier and investor viewpoint. In fact, following the successful €1.34 billion Green Reit sale – a trophy transaction which CBRE were delighted to have brokered during the year – record investment spend was recorded in the Irish market during 2019.

With interest rates decreasing as opposed to increasing during the last 12 months, the normal real estate cycle was extended, encouraging a greater pool of capital to target real estate. Boosted by supportive monetary policy, we continued to see large volumes of both Irish and international capital targeting opportunities in the Irish market, with an increase in appetite from Asian investors being particularly notable during the last 12 months.

Another notable development during 2019 was the exponential growth in the volume and value of build-to-rent investment transactions, which accounted for 46 per cent of overall investment spend in the first nine months of the year.

From an occupier perspective, job creation continued at pace during 2019 and we continued to see strong volumes of leasing activity occurring during the year, particularly in the office sector, boosted by continued expansion of the technology sector both in the traditional central business district and in the suburbs. Encouragingly, in addition to impressive volumes of occupier activity in the Dublin market, there was a welcome improvement in activity in regional cities including Cork, Galway and Limerick during 2019 with several new schemes currently being developed in these cities.

The issue of sustainability really came to the fore in 2019 following public outcry on environmental issues and climate change, culminating in new near-zero energy building regulations coming into force on November 1st last. We believe that developers, occupiers, institutional investors and shareholders will all become increasingly focused on environmental, social and governance factors during 2020.

Another issue that gained prominence during the last year was placemaking and the public realm. In this respect, one of CBRE’s highlights during the last 12 months was co-hosting the inaugural Placemaking Awards in conjunction with the Urban Land Institute. 2019 also saw increased focus on technology’s role in the real estate sector and in this regard, we were particularly encouraged by the number and quality of entries for CBRE’s recent Proptech Challenge.

Prime rents and yields remained relatively stable during the last year, except for the retail sector which experienced some softening. The attractiveness of real estate pricing relative to yields prevailing in other European capitals further copperfastened Ireland’s appeal to international investors during the last year.

With bond yields remaining low or negative and equity returns looking volatile at fully-priced levels, commercial real estate continues to offer attractive stable yields in global managed funds. As we approach 2020, both global growth and the pace of employment growth is slowing. However, CBRE’s house view is that there is no recession in sight. Returns are likely to stabilise further over the course of 2020, but real estate remains highly desired by investors and Ireland’s stable economic backdrop and healthy occupational story bode well for another strong year ahead in the real estate sector.