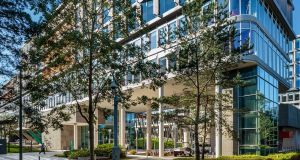 Allianz House occupies a high-profile location at Elmpark Green on the Merrion Road in Dublin 4.

German investment fund, Quadoro Doric, has paid about €53 million for the Irish headquarters of Allianz at Elmpark Green in Dublin 4.

The deal which is expected to complete within the coming week will bring Quadoro’s investment to date in Ireland, to €122 million.

Since entering the Irish market two years ago, the fund, which has some €9 billion of assets under management, has acquired three other office investments in Dublin and Cork. In 2017, it paid €26 million for One Grand Parade in Ranelagh, while in 2018 it paid sums of €24 million and €19 million respectively to secure ownership of Two Haddington Buildings in Dublin 4 and the Webworks building in Cork.

The sale of Allianz House comes just eight weeks after it was brought to the market on behalf of owners Aberdeen Standard (formerly Standard Life) by agent TWM at a guide price of €50 million. The sale price of €53 million reflects a net initial yield of 5 per cent. Michele McGarry at Colliers International advised Quadoro on its acquisition of the property while Michele Jackson and Patricia Ward of TWM advised Aberdeen on the sale.

Allianz House is an eight-storey office building extending to 8,000sq m (86,000sq ft). The property is fully let to global financial services provider Allianz on a 31-year full repairing and insuring (FRI) lease from January 2008 with a tenant break option in December 2033. The annual rent is €2.9million with five-yearly rent reviews from 2019 in line with the consumer price index (CPI). There is a cap-and-collar provision on the rent of -0.5 per cent/3.5 per cent for each five-year interval.

The property occupies a high-profile location at Elmpark Green within the wider Elmpark campus on Dublin’s Merrion Road. Built in 2007 at an overall cost of €550 million by developers Bernard McNamara, Jeremiah O’Reilly and the late David Courtney, the 17.3-acre mixed-use scheme is home to corporate tenants such as Novartis and Willis Tower Watson along with residential and leisure uses.

Elmpark was acquired in its entirety by Starwood, for € 184.3 million in 2016. Having secured ownership, the US-headquartered real estate investor moved to sell its interest in 201 apartments at the Dublin 4 complex to Ires Reit for €59 million, before selling Allianz House for €58 million to Standard Life, shortly after.