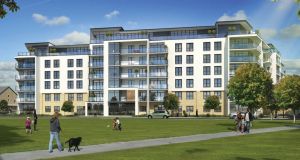 Avestus acquired 197 units at Honeypark in Dún Laoghaire as part of its €216m purchase of the Vert portfolio.

According to the latest analysis by agent Hooke & MacDonald, €2.36 billion was invested in PRS last year – a massive 150 per cent increase on the €930 million spent on the sector in 2018.

While the sector is still in its infancy in relative terms, its increasing dominance of the Dublin property market was reflected once again in the final quarter of 2019 with multi-family investments accounting for a massive 44 per cent of all property transactions. To put that percentage in perspective, it easily outstrips the combined 41 per share recorded for investments in the office (32 per cent) and retail (9 per cent) sectors.

There were 22 main residential investment transactions contracted in Dublin in the fourth quarter of 2019, 12 new-build and 10 of existing stock. The new-build deals comprised 1,650 units while the transactions involving existing stock comprised 1,065 units, giving an overall total of 2,715. The total sales value of the deals done in the final quarter of the year came to €1.1 billion.

The largest transaction in the final quarter was the €216 million sale of the Project Vert portfolio comprising of 385 apartments at Elmfield in Leopardstown and Honeypark in Dún Laoghaire. The vendor was SW3 Capital/Tristan Capital Partners and the purchaser was Avestus Capital Partners/Herbert Park ICAV.

Of the residential investments offered for sale in Dublin in 2019, eight were new-build, comprising 3,115 units and 16 were existing stock comprising 1,066 units.

There was a number of notable multi-family forward sales in Dublin in 2019 including the sale of 214 apartments at the Fairways, Cualanor, Dún Laoghaire by the Cosgrave Group to DWS for €108 million. The 268 apartments developed by Ballymore and Oxley at Dublin Landings in the city’s north docklands sold for €175.5 million to Greystar, while The Quarter at Citywest, Dublin 24 which is being developed by Cairn Homes sold for €94 million to Urbeo. A portfolio of 166 apartments being developed by the Marlet Property Group at Mount Argus in Harold’s Cross, Dublin 6W was sold to German investor Patrizia Immobolien for €93 million. The Benson Building in Grand Canal Dock which transacted for €52.5 million was also purchased by Patrizia.

There are currently six residential investment transactions at sale agreed stage in Dublin, three are new-build developments with 795 units and three are existing stock comprising 123 units. The total sales value is €422 million.

Of the 10,330 multi-family sector units traded over the past four years, 51 per cent (5,211) were new-build while 49 per cent (5,119) were older stock. Referring to the volume of existing-stock sales recorded, the report’s authors say it is indicative of the shortage in the supply of newly-built apartments on the market.

Hooke & MacDonald notes that of the 1,912 new residential units completed in Dublin in the third quarter of 2019, just 788 (41 per cent) were apartments. While the figure may still appear to substantial, the report asserts that it is less than one fifth of the actual requirement per quarter.

While the report finds there has been a significant increase in the number of planning approvals for apartment developments, this has not led to an equivalent increase in commencements. Hooke & MacDonald says this is as a result of a number of restraining factors including the cost and complexity of apartment development; the cost of sites, construction and finance; as well as levies and taxes for new construction. New increased water charges and a delay in supply of water are also emerging as additional impediments for many sites, the report states.

While net yields are currently ranging from 3.7-5 per cent (about 4.85-6.75 per cent gross), they are unlikely to compress much further as they are constrained by an affordability ceiling on rental accommodation.

Commenting on the prospects for investors in the Dublin PRS market, the report notes: “As the market matures and stabilised investments start to trade, lower yields will be evident on these stabilised investments whereas other multi-family forward sales have higher yields because they are not completed and let. Investors are having to commit capital but not getting any return until the investment is stabilised.”