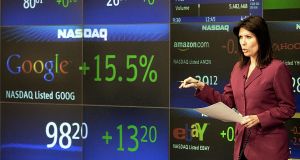 Taking stock. Year after year over the last decade, predictions of an imminent return to form have been dashed. Photograpjh: Stan Honda/AFP via Getty Images

Value investing – buying cheap stocks in the hope of buying low and selling high – has been a winning strategy for most of the last century. However, the last decade has been a miserable one for value stocks, with investors instead flocking to expensive and high-flying growth stocks. Will the next decade be a better one for value stocks or has this age-old investing strategy had its day?

A portfolio of cheap value companies would have grown to almost 10 times the value of a growth portfolio over the 1963-2006 period, according to data from fund giant Research Affiliates. However, it’s been a very different story over the last 13 years: value stocks have been trounced by their growth counterparts, underperforming by 39 per cent.

Only once – at the height of the dotcom bubble in the late 1990s – has value underperformed growth by such an amount. Even more striking is the duration of the current run, which is “by far the longest run on record”, notes Ned Davis Research.

Year after year over the last decade, predictions of an imminent return to form have been dashed. Similarly, expensive growth stocks have continued to defy the doubters. Remarkably, a portfolio of stocks consisting only of companies trading for “crazy” valuations (in this case, stocks trading at more than 10 times their revenues) would have beaten the market over the last decade, according to data from quantitative expert and Alpha Architect money manager Jack Vogel.

A number of factors are at play. One common explanation has been investors’ continued preference for fast-growing tech stocks. The six FANMAG stocks – Facebook, Apple, Netflix, Microsoft, Amazon and Google – now account for about 16 per cent of US stock market capitalisation, notes Research Affiliates, having appreciated nearly tenfold since 2007.

However, tech stocks are only part of the story. Technology companies only account for a small part of the European stock market but the value-growth valuation gap is similarly wide here, last year hitting its widest level in almost two decades.

According to data from German firm Star Capital, European growth stocks have historically been valued 78 per cent higher than value stocks, but that valuation premium had climbed to 156 per cent by late 2019.

In most market cycles, the most profitable growth stocks eventually lose their profitability and thus underperform, says Star Capital’s Norbert Keimling, but low interest rates mean growth stocks across different sectors have been able to maintain their above-average growth rates and profitability for much longer in the current cycle. Many strategists content that the end result has been an increase in concentration across different industries, with the dominant and most profitable players in each sector taking a larger share of the pie.

Others contend that value strategies have become too well-known and simply don’t work as well as they did in the past.

Accounting and economic developments are also factors, according to Prof. Baruch Lev of New York University. His 2019 study, Explaining the Recent Failure of Value Investing, finds that value investing has “generally been unprofitable for almost 30 years, barring a brief resurrection following the dotcom bust”.

Lev’s conclusions are rejected by those who say that, while some value indicators, such as the price-book ratio, may have lost their reliability, this doesn’t mean that value investing is dead. Research from Cliff Asness, founder of the $186 billion hedge fund AQR Capital Management, has found that a composite indicator based on many different value ratios is more effective than any one individual ratio.

Value is not “permanently broken” as a strategy, Asness argued in a research note in November. His contention is that the underperformance of value strategies for most of the last decade was “rational” because highly-valued growth stocks managed to justify their valuations by continuing to deliver higher earnings, revenues and profit margins.

For the last two years, however, value has lost for “irrational” reasons. “Value fundamentals have not come in worse over this recent painful period,” said Asness, but investor sentiment has been such that prices have “gone the wrong way”. Consequently, if one excludes the late 1990s technology bubble, the “value of value is the cheapest it’s ever been by a fairly decent margin”.

Asness is wary of trying to time markets, calling it an investing “sin”, but the relative attractiveness of value stocks meant it was time to “sin a little”, he said.

That was echoed earlier this month by another quantitative manager, Research Affiliates’ Rob Arnott, in a paper titled Reports of Value’s Death May Be Greatly Exaggerated. The paper, co-authored with Duke University finance professor Campbell Harvey, noted that value stocks are now cheaper relative to growth stocks than they have been in 97 per cent of past instances.

Value stocks are likely to significantly beat their growth counterparts in the coming years, the paper suggested. Indeed, this is likely to be the case even if prices never fully revert to the mean, even if the growth-value valuation gap remains wide relative to historical norms.

Index fund giant Vanguard also expects US value stocks to rebound over the coming decade, forecasting annualised returns of 6 to 8 per cent, compared to just 2.5 to 4 per cent for US growth stocks.

Of course, an increased likelihood of elevated long-term returns doesn’t mean that value must outperform growth in the short run, admits Rob Arnott, although JP Morgan is hopeful that a turnaround is under way. In a recent report documenting its 2020 outlook, the bank said it believed the “possible last days of extreme value underperformance are unfolding”.

Large-cap value stocks started to outperform in the last months of 2019, with “stresses” in the initial public offerings (IPO) market – in particular, the pulling of the much-hyped WeWork IPO after investors baulked at attempts to secure an eye-watering $47 billion valuation for the loss-making company – sparking “increased concern about the proliferation of IPOs with little to no earnings growth”.

Highly-priced growth stocks may also be at risk from an antitrust revival, cautions JP Morgan. In the US, antitrust investigations have been declining for 50 years but politicians are increasingly calling for more scrutiny of big tech stocks like Facebook, Google and Amazon.

“History dampens high expectations,” says Star Capital’s Norbert Keimling. “Above-average growth rates and profitability could never be sustained in past technological innovation phases such as the introduction of mass production, whether due to competition, regulation or a broad adaptation of new technologies in traditional companies.”

It is, he adds, “too early to proclaim an end to value investments”. JP Morgan goes further, saying that recent developments indicate that for value investors, “the time to despair may be ending”.

1 Corona beer firm reeling after 8% slide due to coronavirus
2 How well paid do you think you are? Here’s how to work it out
3 Life as a Facebook moderator: ‘People are awful. This is what my job has taught me’
4 Wealthy investors’ legal challenge against Revenue fails
5 Flight attendent seeks High Court injunction against Aer Lingus
6 AIB to sell more than 500 ATMs to Brink’s
7 Coronavirus and the etiquette of working from home
8 Wall Street hammered on coronavirus fears while Dublin dips 4%
9 Bank leaked my loan request to family who tried to rip me off
10 Accumulated profits at Marian Finucane firm exceeded €830,000
Real news has value SUBSCRIBE