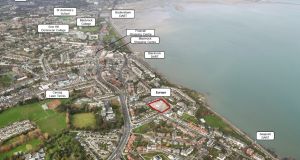 The 1.25-acre site has planning permission for a high-end development of 51 residential units

One of the best ready-to-go residential sites in south county Dublin has come on the market at €9 million through agent Cushman & Wakefield.

The 1.25-acre site, at the corner of Maretimo Terrace and Newtown Avenue in Blackrock, was previously occupied by Europa Motors which adapted its tram sheds for workshop space.

Whether or not a purchaser would be prepared to bet on a successful navigation of the planning system is open to debate given the site’s history of appeals.

The site was last sold in April 2015 when seven parties chased the price up to €7.5 million from a guide of €4.8 million. It was sold without planning permission but a scheme of 60 large apartments had got the green light from planners in 2006 but this had lapsed at the time it was sold.

The site has 120m of frontage on to Newtown Avenue, a one-way thoroughfare which connects with Blackrock village. This part of south Dublin has an excellent range of schools, pubs and restaurants. Chic Monkstown village, recently upgraded with new paving and boasting a chatterati-central Avoca outlet, is within walking distance. As is the sea at Seapoint – one of the best spots for a dip in the capital.

Public transport is close at hand with the Dart at Seapoint and Blackrock stations about five minutes on foot while numerous bus routes – including the Aircoach to Dublin Airport – pass along the recently upgraded Blackrock bypass.

Blackrock is already undergoing major redevelopment and more is planned. A company associated with Paddy McKillen jnr, for example, is planning 257 apartments on a 10-acre site on Temple Road – known as St Teresa’s – which was acquired from a religious order in 2017 for about €30 million.

Meanwhile, the owners of Blackrock Shopping Centre have secured planning for a €10 million upgrade of the property to include a major internal refurbishment and the addition of a new glazed roof.

Work is also nearing completion on the adjacent 6,500sq m (69,965sq ft) Enterprise House office block where a pre-let has been agreed to Zurich Life on a new 20-year lease term.