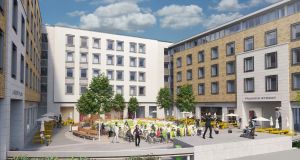 CGI of proposed Tivoli Place aparthotel: the development will include guest facilities, a restaurant, retail space and an exhibition centre

Global asset manager DWS has acquired the Tivoli Theatre site on Francis Street in Dublin 8, and will forward-fund construction of an aparthotel development, known as Tivoli Place, which has a gross development value of more than €70 million.

DWS is developing the 242-bed aparthotel in partnership with Staycity, the short-stay group founded by Ger and Tom Walsh. When the property is completed, in November 2020, they will lease it on a 25-year full repairing and insuring lease with inflation-linked rent reviews every five years.

Savills represented DWS in the transaction, which quietly concluded in the final quarter of 2018 and could be considered the highest value single-asset hotel deal of the year when the asset manager’s overall committed investment is taken into consideration.

Staycity has pre-let a swathe of new aparthotel developments, including a 142-bed property on Mark Street and a further 202 beds on Moss Street, with both Dublin 2 projects being developed by Tetrarch Capital. It has also pre-let a 340-bed development on Little Mary Street, Dublin 1, and has recently opened a newly built 50-suite aparthotel on Chancery Lane in Dublin 8. The Tivoli deal will bring its count of purpose-built aparthotel suites to around 976.

Staycity’s development director Barry Hickey advised that the group already has a pipeline of around 1,400 rooms, including existing stock, suggesting the company is engaged in negotiations to acquire hundreds more rooms in deals that have not yet gone public. The group has a target of operating 1,500 rooms in Dublin by 2021.

With just a few new aparthotels planned for Dublin, it seems plausible that the hospitality group’s plans will involve developer Marlet, which has planning permission for some 750 new aparthotel suites in Dublin city. Staycity is believed to be in talks to lease Marlet’s new Abbey Street aparthotel, comprising over 250 beds, which recently secured planning permission.

Staycity should see a significant boost in demand for their purpose-built aparthotels when the so-called “Airbnb ban” regulations come into force in June, restricting the use of existing residential stock for short-term lettings.

While planning permission can be sought for a change of use to enable the continuation of short-term lettings of existing residential stock, it seems unlikely that any will be granted amid the current housing crisis. Dublin City Council and An Bord Pleanála continue to refuse permission for such changes.

One such example is Bradogue House on Mary Street, Dublin 1, which is operated by a leading hospitality group. In January 2017, the council refused planning permission for the change of use of the building’s 17 apartments to short-stay use, citing its recognition of existing “residential units as a scarce resource”.

An Bord Pleanála upheld the decision in September 2017, though the apartments are still available to rent on the company’s website until at least September 2019, nearly three years after planning was refused and months after the short-stay restrictions are due to come into force.

1 Wetherspoon’s panto-villain chairman may have the last laugh
2 British exceptionalism backfires in style as Johnson tests positive for coronavirus
3 UK needs to be honest about its Covid-19 strategy
4 Will Covid-19 force Primark to rethink decision not to sell online?
5 Retail landlords worried rents will dry up during Covid-19 crisis
6 Remote working doesn’t suit everyone, and it exposes woolly leadership
7 Mobile, broadband suppliers to be given extra radio spectrum
8 Interim examiner appointed to food distribution companies
9 ECB orders banks to freeze dividends and share buybacks
10 Rivian takes on Tesla with big batteries and subtler approach
Real news has value SUBSCRIBE