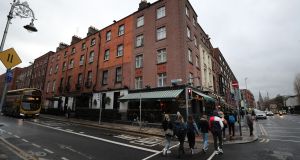 Dublin City Council has refused planning permission to contentious plans by a Larry Goodman family backed company to demolish a group of historic buildings in Dublin city centre to make way for a new office development.

The plan provoked strong opposition from An Taisce, the Kilkenny Group and others with the Department of Culture and Heritage telling the council that the proposal “represents a significant and adverse loss of built heritage and a detrimental change in this quarter which the department cannot support”.

The council has ruled that the proposal “would give rise to the loss of the original historic fabric and urban grain and have a seriously adverse impact on the remaining historic streetscape of Kildare Street and Nassau Street”.

It “would seriously injure the settings of the adjoining protected structures and, as a consequence, set an unwanted precedent for similar type development and would be incompatible with the established character of the subject site and the local area”.

“The proposal, including the elongated facade on Kildare Street, fails to reference the rhythm of the original building blocks and would constitute a visually obtrusive and insensitive form of development,” it said.

“The proposal would be contrary to the provisions of the Dublin City Development Plan 2016-2022 and the proper planning and sustainable development of the area, ” the council added.

The council’s conservation officer’s report said that “irrespective of their unprotected status, the applicant has not justified on any basis the proposed demolition of Nos 47-49 Kildare Street and No 1 Nassau Street, which have until recently functioned as a hotel”.

In a five-page objection, the department said that it was concerned that “the proposed use for this building will significantly undermine its cultural heritage significance in the city”.

In planning documentation lodged with the application, architects for the scheme, Henry J Lyons told Dublin City Council the development sought to sensitively introduce a contemporary commercial building into the historic streetscape of Kildare Street whilst protecting the fabric of the protected structure at number 2 Nassau Street.

The architects said that the design proposals lodged with the plan seek to make a positive contribution to the Kildare and Nassau Street streetscapes by providing an elegantly designed and carefully proportioned building which respects the established building line.

Ternary now has the option of appealing the decision to An Bord Pleanála.

1 Whiskey a go go: sales top $1bn in US
2 Boeing identifies new software flaw in grounded 737 Max
3 ‘Life in Vilnius reminds me of Ireland in the 1990s’
4 Real price of cheap credit? Unaffordable homes
5 Profits rise at JPMorgan Chase and Citigroup but slump at Wells Fargo
6 House prices in Ireland decline for first time since 2012
7 The ‘gangster’ superior, the Irish priest and the wealthy widow
8 The Irish economy is thriving but if you’re not feeling it – here’s why
9 Help, I’ve no PRSI stamps – can I still get a pension?
10 New €18m hangar at Shannon can contain world’s biggest aircraft
Real news has value SUBSCRIBE